Inclusive excellence is more than a value or guiding principle to Wilson Terrell Jr.—it’s an act of belonging.

And it’s one of the keys to Trinity’s future.

As the University’s first-ever Associate Vice President for Academic Affairs – Inclusive Excellence, the concept is right there in Terrell’s job title. Over the next five years, Terrell will be charged with helping Trinity foster an environment where people can connect across differences, act with radical empathy, and nurture enduring relationships.

Why is inclusive excellence important? Simple: Terrell wants Trinity to be the best that it can be.

“If Trinity University wants to be the best it can be, it needs to attract—and keep—top students, faculty and staff,” Terrell says. “We want everyone at Trinity to have a sense of belonging, that people really feel when they come here, that they are really part of this community. If we want Trinity to keep growing, to keep rising in the national rankings, to keep striving for our moonshot, we can’t be missing out on talented individuals.” Terrell moves into this new position in his 19th year with Trinity, where he’s served as associate professor of engineering science. His record is rich with collaborative efforts, as Terrell has championed causes on campus through the same type of relationship-building he’ll rely on in his new role. Terrell co-authored the McNair Scholars grant application, co-authored two National Science Foundation S-STEM grants (FAST and FASTER) for a total of $1.2 million to financially support STEM students, served tirelessly on outgoing President Danny Anderson’s Task Force on Diversity and Inclusion, and has been a regular advocate for student disability services. He will still talk your ear off about the entire slate of services offered in the Tiger Learning Commons, if you’ll let him.

Alongside this track record of success, it is perhaps equally as important that Terrell himself shares the experience of having once been apprehensive about finding his own sense of belonging at Trinity. “I was born in the midwest,, and lived in ‘Chicagoland.’ I went to public institutions my entire life, from elementary through college. So if someone told me 19 years ago that I would be coming to Texas to work at a private university, I wouldn’t believe them, not at all,” he says. “But if I could go back in time, I would tell Wilson Jr. in 2003 to have faith, that the things he's going to learn and the wide range of experiences that he's going to have at Trinity are going to be very important.

As he assumes his new role, Terrell plans to teach  one course each year, hopefully in Trinity’s unique Makerspace—a place where students of all majors and backgrounds can create together in this same spirit of collaboration. Megan Mustain, Ph.D., provost and vice president for academic affairs, points to Terrell’s track record of creating meaningful connections as an invaluable resource to his position.

“Wilson brings a passionate commitment to advancing diversity and inclusion at Trinity, and puts that commitment into effective and transformative action,” she says. “Wilson has shown that he is a powerful advocate, learner, and collaborator in identifying and addressing ways to rectify systemic barriers to belonging and flourishing.  I’m grateful that Wilson will be building on an already fabulous foundation of relationships that he has forged in his 19 years at Trinity.”

Terrell minces no words about the immediate importance of the role he’s stepping into:

“[At Trinity], we will look at what systems are in place that prevent students, faculty, staff, from being the best that they can be. And we’re going to try to eliminate or decrease those systems as much as possible,” Terrell says. “And we talk about belonging, but for some individuals, that's not the case. We need to do a better job on making them feel, really feel, that they do belong. We want them saying, ‘I do belong. I want to be here. I want to stay here, and I want to thrive.” Terrell, along with Mustain and the rest of academic affairs, will start this summer with a few specific goals. First, he wants to work to ensure a talented, diverse pool of candidates as Trinity looks to hire several tenure track positions. Terrell also wants to open discussions with the faculty senate, who will start discussions regarding student course evaluations and has DEI issues as a top priority for the senate’s agenda next year, and also has aims on setting out on a listening tour with faculty.

“I see myself as a facilitator,” Terrell says, “and this is a group that's really thoughtful, caring, and has never looked at me as ‘an amateur.’ They've embraced me, and we're going to move Academic Affairs forward.” 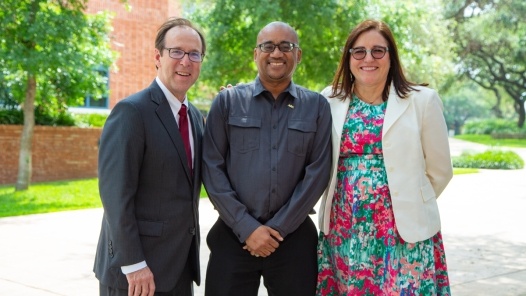 The good news for Trinity, Terrell says, is the University won’t be starting its journey towards inclusive excellence from scratch.

“We're going to be doing some great things by just building on the foundation that's been laid these past seven years with what Danny's done,” Terrell says. “He started putting in the things that Trinity needed, not just diversity, equity and inclusion, but also our digital transformation, and our approach to student success.”

“We are already a diverse campus. Now, we want to be a representative campus. We want to mirror what Texas looks like, and what this country looks like,” he says. “I want to be able to put things in place so that we are successful in terms of diversity, equity, inclusion, and belonging. But this is not going to be something that we just add on—it's going to be integrated into the things that Trinity already does well.”

And while Terrell will be working with faculty and University leadership more closely in his new role, he wants to remind students that he’ll be just as close to their voices as he was in his engineering classes.“I would say to all students, and in particular those students that are underrepresented and marginalized, you will start seeing things come next year.” Terrell says. “We want students to be able to see noticeable change for faculty and staff. We're going to be working on infrastructure, putting things in place that students will be able to see. And we will be involving them in the decision-making process.”