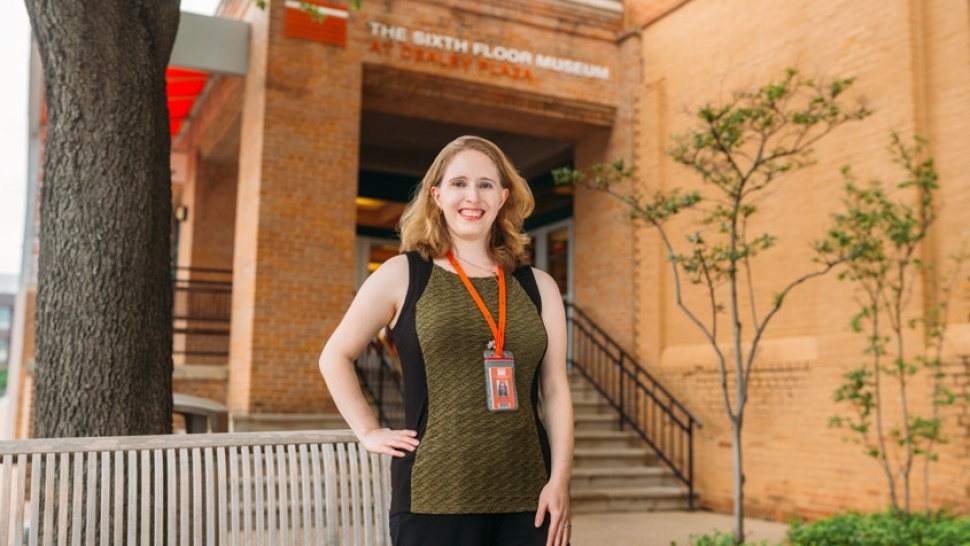 After a quick check for oncoming traffic, Stephanie Allen ’10 steps into the crosswalk. She strides confidently across Elm Street in Dallas’ Dealey Plaza and into the shadow of the former Texas School Book Depository.

It’s windy, and Allen pulls a strand of brown hair from her face. She points up to a corner window on the building’s sixth floor and nods.

The ‘perch’ is an iconic feature of The Sixth Floor Museum at Dealey Plaza, where Allen works as the collections and exhibits manager. She oversees the preservation of the permanent object, archival, and audio/visual collections and maintains an information database about the collection. Allen joined the museum, which explores the life, legacy, and assassination of President John F. Kennedy, in September 2016.

Decorated with posters for the Kennedy campaign and Pablo Larraín’s Jackie, Allen’s office is located in the museum’s basement, where collections not on display are housed. To protect the collection from insects and other damage, Allen runs an integrated pest management (IPM) program and environmental monitoring program that tracks the physical well being of every object. The museum holds newspapers, books, buttons, posters, condolence letters, memorabilia, and other items from around the world.

It’s an extensive collection that Allen familiarized herself with over the last 10 months.

“Learning about President Kennedy through these materials has been absolutely fascinating,” says Allen. “He was such a charismatic individual and his death was a moment in history that really touched people, not only because of his initiatives and programs, but also because of how coverage of the event was broadcasted for the first time to that degree.”

The museum’s permanent exhibit, John F. Kennedy and the Memory of a Nation, encompasses the entire sixth floor and includes the famous sniper’s perch where Lee Harvey Oswald allegedly assassinated Kennedy. While this exhibit does not move, items are rotated and all are monitored for temperature, humidity, and appropriate lighting levels. When traveling exhibits come to the museum, Allen is responsible for exhibit design and collaborates with the collections department on choosing items and how they are arranged. The team always considers an overarching theme or idea that everything in the exhibit must reinforce.

Although museum work is now her passion, Allen, an anthropology and art history double major, once considered a career as a field archaeologist. As a Trinity student, she even went on a dig, but realized it wasn’t something she wanted to pursue long-term. Jennifer Mathews, professor of sociology and anthropology, was Allen’s academic adviser and recommended an internship at the San Antonio Museum of Art.

“That internship was absolutely amazing,” says Allen. “It made me realize all of the work that goes on behind the scenes in museums that I had never really considered. My eyes were opened to this viable career option and a fascinating new world of actual objects and primary sources.”

As a student, Allen was president of Trinity’s Gaelic Cultural Society and was a member of the Trinity Multicultural Network, precursor of the Trinity Diversity Connection. She was energized by learning about diverse cultures and being part of a larger organization. One of Allen’s favorite courses, taught by Mathews, was Anthropological Ethics. It tasked students to analyze ethical case studies and their ramifications in sociocultural anthropology, physical anthropology, and archaeology, and even featured a week on museum-based ethics. Allen loved the class so much she later became its teaching assistant and even returned as an alumna, a few years later, to be a guest speaker via Skype.

After Trinity, Allen attended George Washington University for a master’s in museum studies, concentrating in collections management and material culture. She then moved west to Norman, Okla., to work at the Sam Noble Oklahoma Museum of Natural History at the University of Oklahoma. While there, Allen met her fiancé, fellow Trinity alum Jansen Givens ’09, at a Trinity Oklahoma-Chapter event.

A north Texas native, Allen is happy to be back in Dallas and eager to share the life of President Kennedy with the more than 400,000 people who visit the Sixth Floor each year.

“I want our visitors to gain an appreciation for the man, his presidency, and the impact he’s had on the country,” says Allen. “There’s also the impact of his death and sheer fact of where we are, which is still amazing to me.”