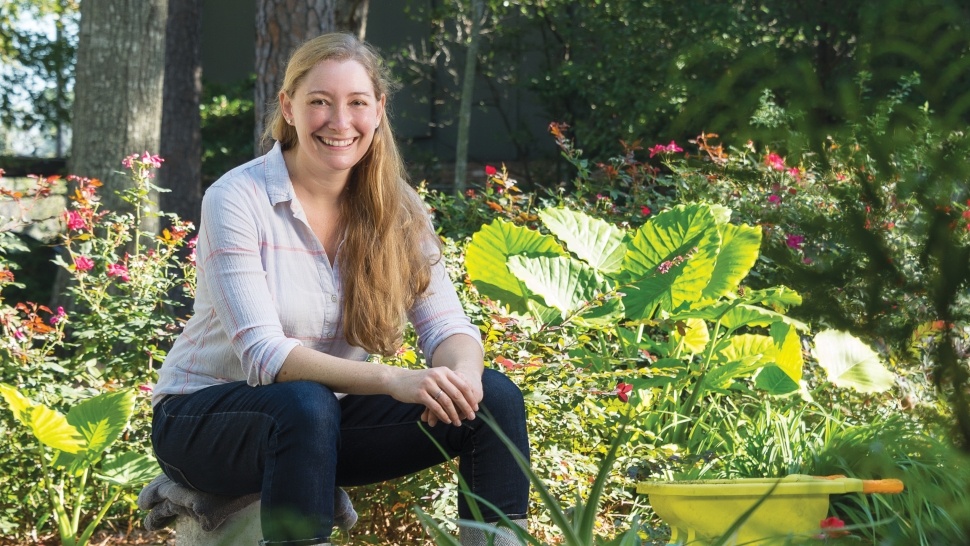 Growing up on a 900-acre family rice farm in northern California, Whalin Harter-Leahy ’03 learned to drive a tractor at age six or seven.

“We were expected to work hard on the farm and take an active role,” she says, adding that she not only learned how to operate equipment on the family’s farm, Cherokee Ranch in the foothills of the Sierra Nevada mountain range, but she also developed an appreciation for the value of food.

“My earliest memories come from working the earth with my grandfather and parents on the farm. Those are the happiest memories I have: the smell of the dirt, the feel of the earth in my hands, the sun shining,” Harter-Leahy says.

Farming imbued in her a sense of continuity and history, knowing that five generations of her family before her were stewards of the same land. She is the sixth generation of her family to be part of Cherokee Ranch, and although she lives in Houston with her family, she is still connected to the farm by overseeing its account management and corporate structure. “There is a sense of being part of a larger whole,” she says. “It’s easy to get distracted by walking on concrete and buying things from grocery stores without having any idea of what’s behind that perfect apple you just bought.”

That sense of connectedness prompts her to eat rice every day, and it is her two-year-old son’s favorite food. Rice was even incorporated into her wedding bouquet and in some of the decorations at her marriage ceremony held at Rice University. The caterer even offered a “grower’s discount” because of her rice-farming background.

In Houston, her family lives just north of the reawakening Heights area on an acre and half of land that was a plant nursery for 40 years and still grows pines, oaks, and lush greenery. “I keep threatening to turn the back half of it into a rice paddy,” she jokes.

On a more serious note, she has created a garden to teach her son, John, the value of growing plants. “He digs with me. We spend most of our afternoons in the garden, and he knows the names of the plants. He knows what to harvest and what not to harvest,” she says. “He may not be the seventh generation growing rice in California, but we are finding a way for him to be active in farming.”

Back in California, the farm is run on a daily basis by her cousins, the Lundbergs, known for producing a complete line of healthy rice, rice cakes, and rice crackers. Harter-Leahy recalled receiving 50-pound sacks of rice from them as a Trinity student, a commodity she used to barter with roommates and professors.

She speaks fondly of the late John Donahue, professor emeritus of sociology and anthropology, who was the first person she met as a prospective Trinity student. She says he was “profoundly important” in her life, helping to cement sociology and anthropology as her major and teaching her lessons – along with professor Richard Reed – that she used all over the world. After graduating, she worked in Morocco developing organic agriculture and later moved to Qatar to manage an educational enterprise. She met her husband while working in the Middle East, where, in addition to her other jobs, she was developing a market for organic rice.

When it came time to plan her wedding, Harter-Leahy says there was no hesitation to ask Donahue to perform the ceremony. “Dr. Donahue was phenomenal and exhibited such a culmination of humanity and humor,” she says. “He married my husband and me, and my son is named John after several people, including him.”

She credits Donahue with imparting a sense of service and philanthropy that she continues to uphold. Since Harter-Leahy attended Trinity on a scholarship, she feels compelled to “pay it forward” by sponsoring a student from Ethiopia with a scholarship to attend community college. She also is branching out with involvement in an organization named Plant it Forward, which promotes urban farms for Houston while providing small businesses for refugees. The nonprofit’s slogan is “a farm in every neighborhood,” a philosophy that Harter-Leahy fully embraces.