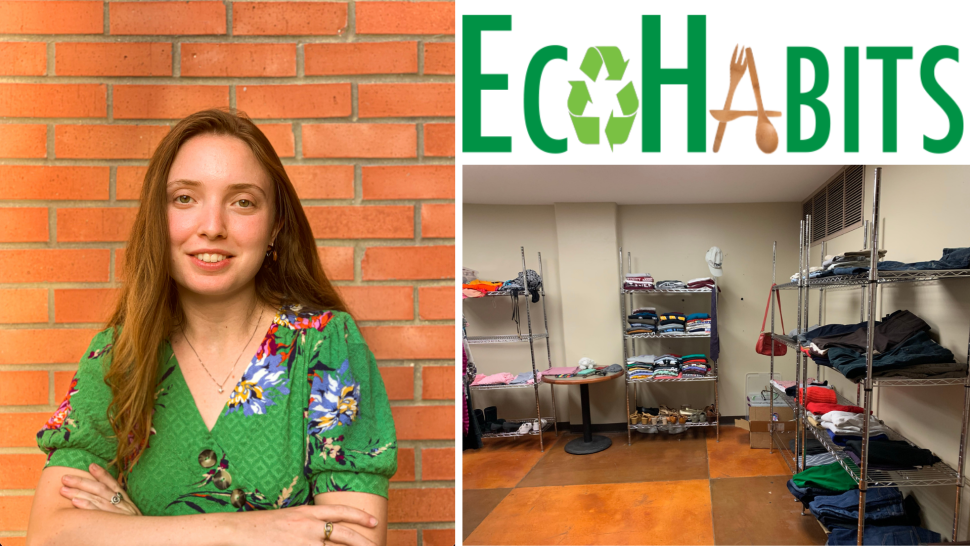 During her senior year, Carlotta de Bellis ’20 didn’t expect that her coursework would plant the seed for multiple sustainability efforts on campus that now reach hundreds of students.

Carlotta graduated from Trinity last year with a double major in art history and in communication, in addition to a minor in architectural studies. In the spring of 2020, Carlotta was working on her Communication Capstone, which utilized the TU Sustainability Committee. Together, they were initially trying to curb the overconsumption of plastic on campus through an Integrated Marketing Communication (IMC) plan, which Carlotta called EcoHabits. Towards the end of the semester, the proposed IMC had as its goal to create and disseminate advertising and marketing tactics that would help instill a lifelong sense of environmental consciousness in the members of the Trinity community. As we all know, the Spring of 2020 did not go as planned for anyone, and all the hard work and connections that Carlotta had made were stalled.

However, before graduating, Carlotta was determined to find students who would continue working on EcoHabits. She contacted current Trinity juniors Jahnavi Nikkam and Natalia González to get the ball rolling. Today, EcoHabits is a grassroots organization on campus (with about 12 members) that has made great strides since its inception. This past academic year, the group worked on creating a virtual food pantry called Nourish, which helps those who are food insecure in the Trinity community; a clothing closet to combat fast fashion called ReWear; and has helped launch a campaign against single-use plastic with the campus food provider, Aramark, which has agreed to sell reusable cutlery to students on campus. All of this could have never been possible without the help and support of the University chaplain, Alex-Serna Wallender ’08, M’09, and Dean of Students David Tuttle and his office. In fact, thanks to them, Nourish was initially funded by the Reverend Judd Student Emergency Fund and is now accepting donations. Likewise, ReWear was initially established through a large clothing donation drive from faculty, staff, and students in early February.

During her work with the ReWear program, Carlotta de Bellis '20 poses near a table of gently used clothing.

The group’s strength, Carlotta says, is its willingness to take initiative and collaborate with different stakeholders on campus. Even though, through her capstone project, she laid down some of the groundwork for this organization, Carlotta attributes all the organization’s success to the great work of the current students who are involved.

Carlotta was offered the opportunity to remain at Trinity for an additional year after graduating as the Post Baccalaureate Fellow for the Collaborative for Learning and Teaching. This past year, Carlotta has been volunteering her time to help EcoHabits grow and expand its impact on campus. Alongside Sustainability coordinator Sharon Curry, Carlotta advised the group and helped them fortify their connections with the campus community to make the change they strived to accomplish.

Carlotta will be leaving her one-year position at Trinity this May to pursue a master’s degree in architecture, in which she will focus on historic preservation to benefit the environment. She hopes that EcoHabits will continue finding ways and creating initiatives to make the Trinity campus greener and more environmentally conscious in years to come. How do you weave together communication, art history, and architecture, you ask? Carlotta’s vision is that museums should not just be about the artwork that lives there but the space around the artwork. How do people navigate, for example, around paintings and sculptures in the museum space, in such a way that they are intimately interacting with the artwork? Carlotta’s ideas not only make my head spin, they make me want to take three seemingly unrelated areas of study on Trinity’s campus and hand them to her and say, “Okay, go for it. Figure out a connection between these three.” I’ll bet my one-time use fork she could do it.

If you live in the San Antonio area and are interested in donating to the ReWear closet, reach out to ecohabits1@gmail.com.

Besides being a lifelong educator, Shelly (Armstrong) Arneson '88, Ed.D., is an author, professor, and educational consultant. Follow her work at arnesoncommunicates.com.