For more than 75 years, Trinity University has enjoyed a unique relationship with the land it sits on in San Antonio and Bexar County.

But for thousands of years prior to Trinity’s arrival, this land was first known as Yanaguana, as San Antonio was named by its Indigenous inhabitants, the Payaya. Today, there are still an estimated 58,000 people of Indigenous descent living in San Antonio, according to the latest U.S. Census information. This total includes students right here at Trinity University.

Now, a group of Trinity students has formed a Land Acknowledgement Alliance (LAA) and are currently working with the University’s administration to enact a land acknowledgement agreement. This act of acknowledgement serves as a formal recognition of the Indigenous peoples who have lived and continue to live in the communities that Trinity inhabits now as well as a recognition that the University resides on the land they historically called home.

This is not a step that Trinity is taking alone: Other universities in states such as Florida, Connecticut, Illinois, and California have already made similar acknowledgements. Now, says first-year Adam Kingery ’25, it’s time for Trinity to follow suit, bolstered by strong support from students, the administration, and a network of campus and community allies.

“These land acknowledgements are important because they give respect to Native Americans who were on this land before us and are still here today,” says Kingery, who is a member of the Alliance. “And it’s also a recognition of the trauma that was imposed on them and the genocide enacted against them.”

Through the LAA, Kingery joins a group of Trinity students who celebrate native heritage, either of themselves or others. Kingery, along with fellow first-year Blaine Martin ’25 and senior Gabriel Mello ’22, have joined non-native allies such as Nathan Brown ’22—the Alliance’s founder—and Jahnavi Nikkam ’22 in pushing for a land acknowledgement agreement.

“I got involved because I wanted to be a part of some lasting impact on the University,” Brown says. “In the wake of Black Lives Matter and other social justice movements since 2020, the University pledged to actively deconstruct racist structures and provide equitable support for students and employees of color. This work is important to me because it’s a highly visible, intentional, and progressive series of actions to recognize Indigenous communities who have been removed, killed, and disregarded, yet continue to thrive in San Antonio.”

Mello, who met Brown through anthropology classes, focuses much of his undergraduate work on Native American studies. “That’s partly because of the family connection I have: Like Blaine and Adam, I have some degree of ancestry from Native Americans,” he says. “And I was honestly kind of shocked to hear that Trinity hadn’t done something like [a land acknowledgement agreement] already.”

The LAA is also looking beyond the land acknowledgement agreement toward a series of goals that will provide more sustainable opportunities for Indigenous communities and networks to grow on Trinity’s campus. Kingery and Martin say that first and foremost of these is re-forming Trinity’s Indigenous Peoples Club (IPC), which had previously existed on Trinity’s campus but has not been active since Spring 2020.

“Right now, there’s not really any organization to gauge the measure of the Indigenous community on campus,” Martin says. “But I can say right now we have a good amount of people who are supporting the formation of the IPC. Most of them are younger. And as I’ve reached out to people I know, just to see if they’re interested, those people have then reached out to other people, and now it’s expanding faster than expected.”

Juan Sepúlveda, J.D., the president’s special adviser for inclusive excellence, has been an institutional ally that the group has counted on during the drafting of the land acknowledgement agreement. He’s also been preparing to serve as an adviser to the Indigenous Peoples Club and represents a direct connection between the alliance and Trinity leadership. Sepúlveda says he’s interested in “helping the group go through a process that is formal and respectful to all parties involved.”

Sepúlveda serves as a connection between the group and a series of relevant national contacts, namely the National Urban Indian Family Coalition, a Seattle-based nonprofit that advocates for American Indian organizations and urban American Indian families.

“It’s great to see a group of students bringing these kinds of issues to the table at Trinity, to make sure they’re in the conversation. It’s encouraging to see the group thinking about continuity and, as a faculty member, to encourage Trinity students to build sustainable interests,” he says. “But it’s also important that they’re trying to connect with allies—you don’t have to be Native American to be part of this—and expand the network of people coming on board.”

Among these allies are several local organizations such the American Indians in Texas at the Spanish Colonial Missions (AIT-SCM), where Brown spent the summer of 2021 as an intern. This nonprofit, established by the Tap Pilam Coahuiltecan Nation, works to preserve the culture of Indigenous people who resided in the Spanish colonial missions spread across San Antonio.

“This group was instrumental in shaping my perspective of community engagement, involvement, and partnering, as my coworkers were gracious in teaching and leading me in their amazing work in San Antonio,” Brown says. “I will never forget the patience, forgiveness, and welcome that they showed me as I bumbled my way through that summer. I’m still learning, through our team’s work, about how to engage with our region’s Indigenous nations equitably and respectfully.”

And the group is experiencing a surge of support from allies right here on Trinity’s campus, which includes Courtney Balderas, Trinity’s director for Student Diversity and Inclusion, and Jahnavi Nikkam, president of Trinity Diversity Connection (TDC). Nikkam says that when Brown reached out to her about having TDC provide more institutional support and funding for both the land acknowledgement agreement and the alliance, she jumped at the opportunity to have an impact.

“I think allyship is huge, and I think Trinity is working to do a lot more of that,” Nikkam says. “It is so important at Trinity for marginalized communities, and for people of color in particular, to feel community at Trinity and in a post-pandemic kind of world. Whether that be through finding community, helping finance projects, or paying to have speakers and panelists, it’s going beyond allyship to be more active as well. We’re fostering those connections and being able to do things that are very active rather than very passive.”

Nikkam says she wants to see the University secure more funding for Trinity’s Diversity and Inclusion Office in order to hold more cultural events on campus. “When we look into the archives in the future, we want to be able to see and look back on this time as a time of activity,” she says.

Martin, Kingery, and Mello have also suggested Trinity could take simple steps such as including Indigenous voices at graduation ceremonies, first-year orientation, and other important events. The University could also improve the visibility of certain days of recognition, such as Indigenous Peoples’ Day, Native American History Month, and anniversaries of historical events in San Antonio and across the country.

Brown also says he’d like alumni of the University to consider taking steps to create and secure scholarships for Native American students, specifically from local schools. “I want Trinity to have a strong pipeline to our Native American communities in San Antonio. Our university is very proud of our location in San Antonio, and we should be: This city has thousands of incredible years of history and a diverse population, and Trinity should look a lot more like the city around it.” 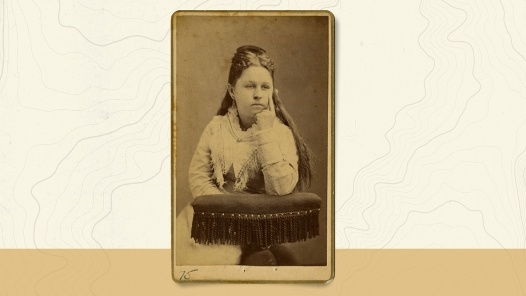 Ada Colbert attended Trinity University from 1875-76, and is believed to be Trinity’s first Native American student. She came to the University from what was then known as “Indian Territory,” now part of Oklahoma. Colbert’s father was Chickasaw and her mother was Choctaw; both of her parents were...

The Land Acknowledgement Alliance says alumni can have a direct impact on the group’s goals by making monetary
donations to the Indigenous Peoples Club during fundraising events such as Trinity’s annual 1869 Challenge.