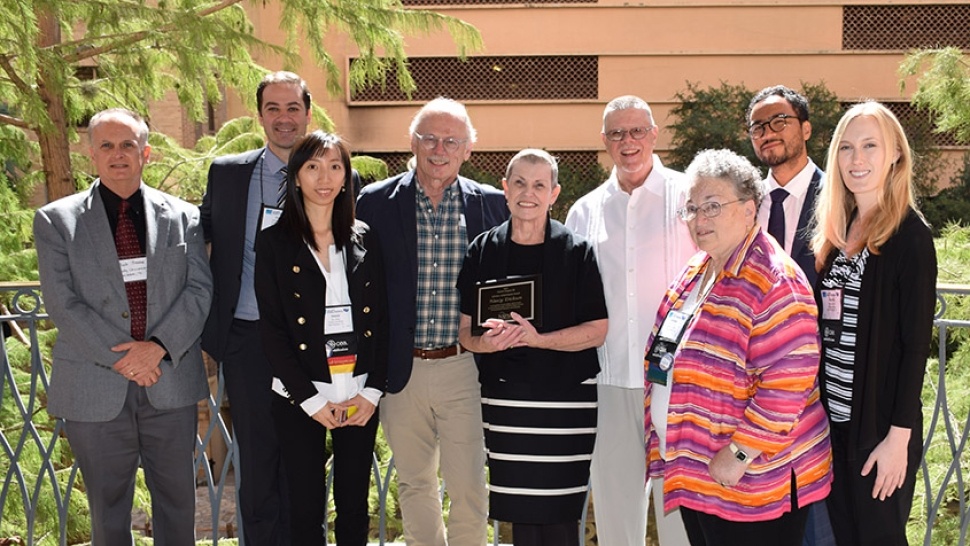 Not only has study abroad pioneer Nancy Ericksen sent about 7,500 Trinity University students overseas, she also is credited for being part of a “legendary generation that launched international education in Texas.”

For her 31 years as Trinity’s go-to staff person organizing and arranging international student travel as well as for her influence in the field throughout Texas, Ericksen received a lifetime achievement award in October from NAFSA Region III. NAFSA is a professional association of international educators. A month later, Ericksen retired, saying she was trading her Trinity family for her husband, children, and grandchildren. And it’s no surprise that she also plans to travel.

Ericksen, who retired as assistant director for Study Abroad with Trinity’s Center for International Engagement, said she applied in 1986 for what she thought would be a quiet, part-time position in the office of George Boyd, dean of humanities and arts and director of study abroad.

“This was an accident,” she says of her career at Trinity.

Instead of finding low-key serenity on a university campus, Ericksen discovered her passion. By the end of the first day, her part-time job had evolved into a ¾ time position. Study abroad was a modest undertaking, almost executed in secret, but she and Boyd began to change the culture and attracted students who wanted to have an international experience as undergraduates. As part of the development of the office, Ericksen, Boyd, and other administrators had to figure out how to make sure that courses taken in another country would count as part of the student’s record and comply with curricular requirements. In three decades, participation has grown from a handful of students from each graduating class to one third of each cohort. Ericksen was a natural at helping students discern and articulate their personal and professional reasons for studying abroad, realize the consequences of being off campus for one or two semesters, and ultimately, get in touch with their dreams.

Andre Martinez, study abroad adviser who nominated Ericksen for the NAFSA award, estimates she helped roughly 7,500 students go overseas during her Trinity tenure. He called her “the most dedicated person I have ever met,” saying that she responds to needs of students after hours and on weekends and is a stellar mentor to everyone she meets.

“She’s left quite a legacy,” says Katsuo Nishikawa, director of the Center for International Engagement.  “She has shaped the path of so many students.”

Ericksen says she will miss the students and collegial staff and faculty of Trinity as well as her counterparts at other Texas colleges and universities. She founded the Texas International Monthly (TIM), a network of schools in the Lone Star State that promotes study abroad opportunities and pool resources.

In acknowledging Ericksen’s founding role with TIM, Heather Thompson of the University of Texas at Austin, says Ericksen “is known for building bridges with academic and support units on her campus to ensure that all aspects of the university come together to support the student.”

Charla Baily at Texas Lutheran University commends Ericksen’s unfailing work and commitment to the field. “Through untold hours of work – advising students, creating policies, advocating for and against bills to help the field and working with administration for support for study abroad – she has become a most respected professional among her colleagues as well as within the field of international education.”