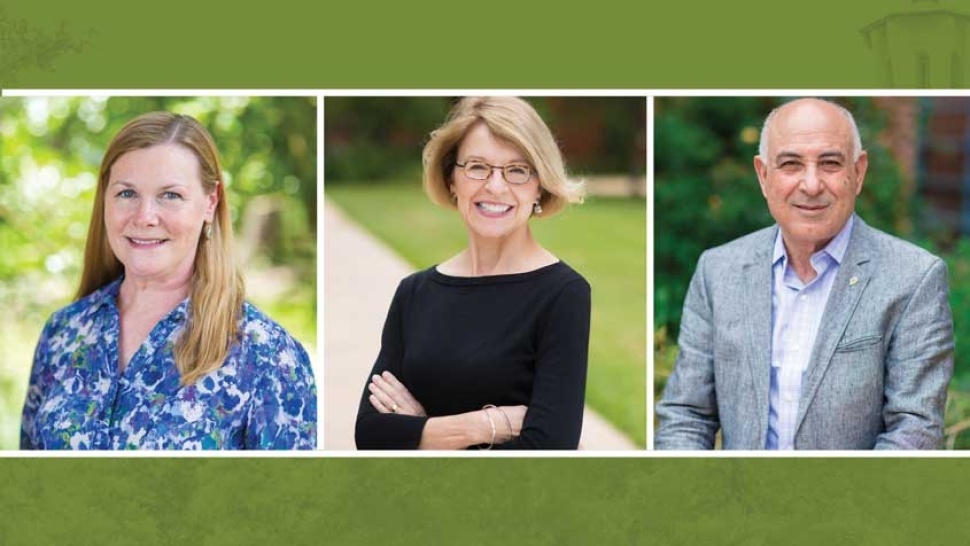 Three Trinity University faculty members have been named to three-year appointments as Murchison Term Professors. The announcement was made by Deneese L. Jones, vice president for Academic Affairs at Trinity.

The honorees are Saber Elaydi, professor of mathematics; Diane Persellin, professor of music; and Diane Smith, professor of geosciences. The three-year appointments are effective June 1, and each professor will receive an additional $20,000 annually to support research activities. Together, they have amassed more than 96 years of teaching and service at Trinity.

“This distinguished group is by far one of the most stellar groups of academic professionals that could be identified. They exhibit a great transformational perspective for excellence in their diverse and contemporary areas of expertise in teaching, research, and service. Each one is unique and inspirational in the differences that they are making in the academy, the vast communities represented, and the students that they serve,” Jones said.

The prestigious professorships began in 2010 for consideration by full professors who have been at Trinity for at least 10 years. These three faculty members comprise the third cohort of Murchison Professors.

The Murchison Professorships are made possible by an endowment from the estate of Norine R. Murchison, wife of T. Frank Murchison. He was co-chair of the original Trinity Building Committee and influential in the decision to move Trinity to its current campus. Creating the Murchison Term Professorships from Mrs. Murchison’s estate was a way for Trinity to preserve and further her love for the University.

Elaydi, a researcher in mathematical biology, neuroscience and economics, arrived at Trinity in 1989 and chaired the mathematics department from 1991-99, 2010-11, and co-chaired from 2008-10. He launched an international movement involving difference equations and discrete dynamical systems that led to him serving as editor-in-chief of the Journal of Difference Equations and Applications from 2012 to the present and co-editor-in-chief of the Journal of Biological Dynamics from 2006 to the present. In 1997, Elaydi started a Research Experience for Undergraduates program at Trinity, and in 2009, he was instrumental in bringing to Trinity the interdisciplinary field of biomathematics by securing a $900,000 grant for Undergraduate Biology and Mathematics from the National Science Foundation. He received the Award for Distinguished Scholarship in 2011 and was a Fulbright Scholar in 2000. Elaydi holds a doctorate from the University of Missouri at Columbia.

Since joining the Trinity music faculty in 1982, Persellin has taught courses ranging from jazz history to graduate music education seminars and served as chapel organist. She has published 100 journal articles, 13 book chapters, six co-authored books, and made 86 national and international presentations about music education. She was editor-in-chief of General Music Today from 2004-10 and volunteered as education director for the San Antonio Symphony. Persellin also serves as handbell director and organist at local churches and volunteers with arts and education organizations. At Trinity, she has directed the Orff-Schulwerk Summer Music Course for 17 years and was interim co-director of the Collaborative for Learning and Teaching. Persellin has been a visiting professor or guest lecturer at Hong Kong Baptist University, Central Connecticut State University, and the University of Florida. She earned a doctorate from Arizona State University.

Smith began her career at Trinity in 1984 after earning her doctorate from Rice University. She served as chair of the geosciences department (1998-2004 and 2012-16) and associate vice president for Academic Affairs, budget and research (2004-11). She has been project collaborator or principal investigator on grants from the W.M. Keck Foundation, National Science Foundation, Ford Foundation, and Sherman Fairchild Foundation. Her research publications in the field of igneous petrology, many of which include undergraduate researchers, have been cited more than 1,700 times and downloaded more than 5,200 times. Smith received the Distinguished Service Award from Trinity in 2014 and the Outstanding Educator Award from the Association of Women Geoscientists in 2013. She was elected to Fellowship in the Geological Society of America in 2008 and currently is a member-at-large on the executive committee for the American Geosciences Institute.

Trinity University is a nationally recognized liberal arts and sciences institution noted for its exceptional faculty and commitment to the comprehensive preparation of its talented student body. It is a learning community that has charted its course with a steadfast commitment to excellence since it was founded in 1869.