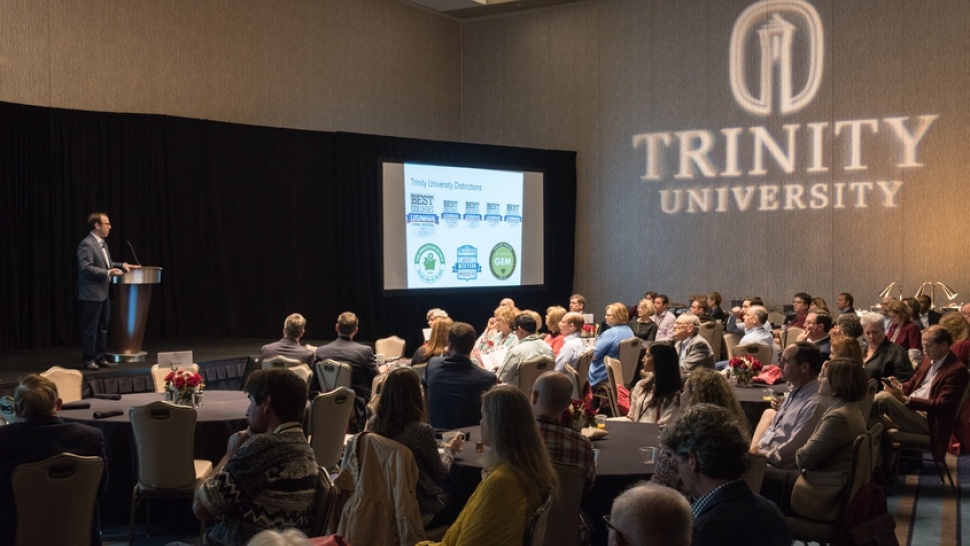 Hands waved energetically and voices shouted above the clamor as old friends reunited with one another and happened upon their former professors. Parents, some who are alumni themselves, chatted excitedly with new acquaintances. On Saturday, April 8, 2017, nearly 100 people gathered at the Marriott Marquis Houston for the inaugural National Conference for Trinity Alumni and Parents. Seven decades of Trinity alumni were represented in the attendees.

Trinity president Danny J. Anderson greeted participants over breakfast with opening remarks about higher education today and his personal experiences since being inaugurated in February 2016. Anderson picked up on the room’s atmosphere, describing an excitement for lifelong learning pervasive amongst the Trinity community.

Tess Coody-Anders ’93, CEO of Resolute Health in New Braunfels, Texas, attended the conference because she “loved the idea of bringing alumni and parents together to engage directly with professors and staff.” She particularly enjoyed the breakout session with Lesch.

“The timely, and now prescient, session with David Lesch was an intellectual treat,” says Coody-Anders. “It was great to sit in the front row again – this time as an adult learner.”

Houstonian Kevin Foyle ’92, vice president for development at the University of Texas Health Science Center, says he didn’t think twice about attending the conference. Foyle especially liked the breakout session with  Judd and Brackenridge because it “immediately transported him back to campus” and the “wonderful times” he had at Trinity as an undergraduate. He also appreciated the chance to hear President Anderson speak about his vision for Trinity.

“The conference provided my first opportunity to hear from President Anderson and learn about today’s Trinity experience,” says Foyle. “I left feeling confident that the University will continue to excel and advance its academic standing amongst its peers and aspirants.”

Following the breakout sessions, participants enjoyed an ARAMARK-sponsored luncheon that featured Dr. Mark W. Kline ’79, the J.S. Abercrombie Professor and Chair of the Department of Pediatrics at the Baylor College of Medicine. Kline spoke to an enthralled room about his work to combat HIV/AIDS in sub-Saharan Africa and Eastern Europe.

After a short break, participants visited the Houston Museum of Fine Arts with private tours by Elizabeth Ward, professor and chair of the Trinity Department of Art and Art History, and Kate Ritson, a sculpture professor in the same department. Back at the Marriott Marquis, the Trinity Chamber Singers captivated conference attendees at a President’s Reception with President Anderson. For evening entertainment, participants decided between dinners at area Houston restaurants or a Houston Astros game at Minute Maid Park.

The Trinity Alumni Relations and Development office is already planning on a second annual conference sometime in 2018. Foyle called the conference a “wonderful opportunity to invest in his own degree” and Coody-Anders says she “left feeling smarter than when I arrived. It was like dusting off the intellectual cobwebs!”