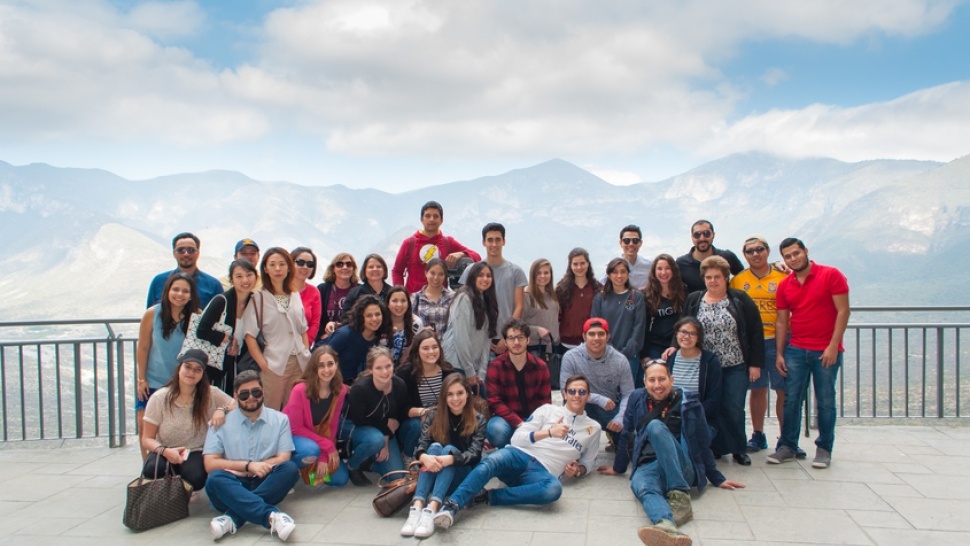 A Transnational Partnership
Trinity and Monterrey Tec plan together for a bright future
Carlos Anchondo '14
Monday, May 22, 2017

At a taqueria in the heart of Monterrey, Nuevo León, Mexico, rapid exchanges of English and Spanish filled the restaurant and echoed off the walls. Students from the Monterrey Institute of Technology and Higher Education, or Tec, and Trinity University became fast friends over food and drinks. The February dinner kicked off a five-day trip meant to renew Trinity’s relationship with the Mexican university.

“It was an honor, as president, to talk with the group about the importance of collaboration,” says Anderson, a fluent Spanish speaker. “It was a wonderful time to think about our journey to build a shared vision and the connections that Trinity has had in the past with Monterrey.”

Sixteen Trinity students and more than a dozen University faculty flew south to re-energize the exchange partnership between Trinity and the “MIT of Mexico.” First cultivated by Richard Burr, professor emeritus of business administration, and former economics professor Jorge Gonzalez, the alliance had waned in recent years as security concerns made travel to Monterrey problematic. Recent improvements in the security situation have allowed the partnership to be rekindled.

Suarez structures the course using the COIL method, which stands for collaborative, online, and international learning. The Trinity-Tec partnership is distinctive because students meet in-person as well as corresponding online. Only a 45-minute flight separates San Antonio and Monterrey.

“Monterrey Tec is one of the best universities in Latin America, where students are engaged and innovative,” says Suarez. “Traveling to Monterrey, the entrepreneurial and industrial capital of Mexico, is an eye-opening experience for students that go there.”

Students enrolled in Suarez’s course used the trip to start crafting a business plan with Tec teammates. Julia Shults ’19, an intended economics major from Austin, participated in the trip. She picked the course to expand her Spanish vocabulary and understanding of Latin American business. Experiences like this originally attracted her to Trinity.

“I chose Trinity for opportunities with this kind of international collaboration,” says Shults. “Traveling to Monterrey was important not only for working on our projects and to identify potential obstacles, but also for cultural exchange and to break down stereotypes in a current political climate full of tension.”

Tec students hosted Trinity undergraduates in their dorms for a greater appreciation of college life in a foreign country. Tec’s flagship campus is in Monterrey, with satellite campuses across Mexico. In addition to working meetings and a campus tour, students had the opportunity to tour Monterrey’s historic downtown, travel to the Las Grutas caverns, and present their proposed companies in a 20-minute lecture to professors.

In late March, Tec students reunited with their Trinity teammates in San Antonio to pitch their companies at the Stumberg venture competition. The seed round offered teams the chance to earn $5,000 toward launching their startups.

According to Katsuo Nishikawa, director of the Trinity Center for International Engagement (CIE) and associate professor of political science, these opportunities for collaboration broaden students’ worldview and prepare them for an interconnected and global business landscape.

“At Trinity, we want students to graduate knowing they can be effective anywhere they work, whether that’s Europe, Asia, Africa, or Latin America,” says Nishikawa. “The idea is that they graduate and have a 360 degree vision of where to go and that they have the aptitude and skills to be successful.”

In addition to Suarez’s students, Trinity professors also had the opportunity to learn and share with Tec professors. Faculty members were impressed with Tec’s problem-based approach to learning, where faculty work with students from different majors to collaborate together to solve community problems. Tec’s urban location caused Trinity to evaluate its own position in San Antonio and opportunities for deeper community engagement.

Beyond business coursework, Trinity faculty from modern languages and literatures, political science, and other disciplines looked for opportunities for future partnerships. Anderson says the trip energized him with “opportunities to be a strong team working together.” On the Monterrey trip, Anderson shared with students and faculty about his experiences studying abroad in Puebla, Mexico, and the impact that had on his career trajectory.

“When you study abroad,” Anderson says, “you cross not only physical boundaries, but also linguistic and cultural boundaries, and this changes the way you see the world.”

While in Monterrey, Anderson signed a reaffirmation resolution to acknowledge Trinity’s past relationship with Tec and to signify a rejuvenated partnership. Students of all majors have the opportunity to study abroad and are encouraged to explore programs at Tec.

For more information about this trip or the University’s partnership with Monterrey Tec, contact Katsuo Nishikawa at knishika@trinity.edu.