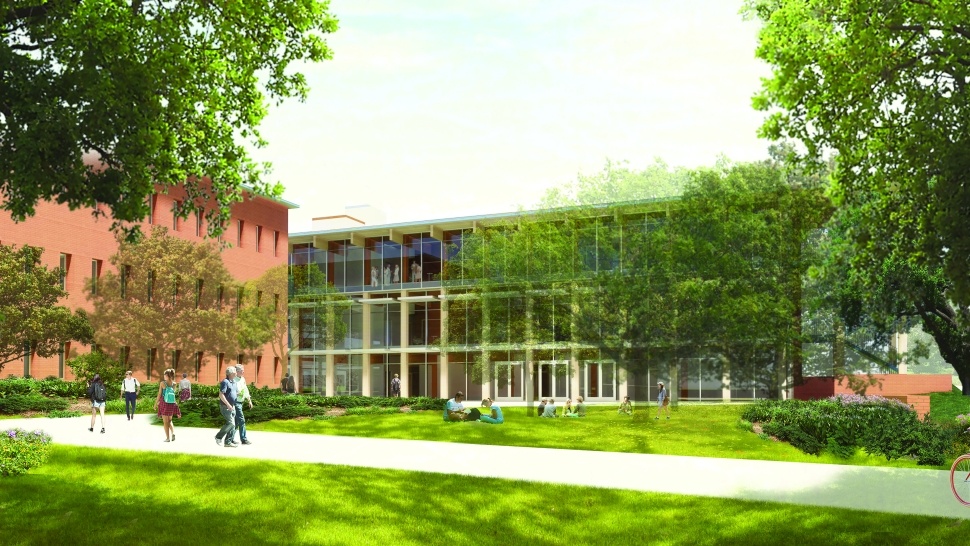 Trinity officially broke ground for its newest academic building, Dicke Hall, on Thursday, May 20. Dicke Hall, which is named for University alumni Janet ’68 and Jim ’68 Dicke, will be Trinity’s new home for the Humanities. This three-story 40,000 square-foot building is scheduled for completion in fall 2022, and will house the Humanities Collective, the Department of Religion, and the Department of English.

“The overarching goal of the project is to create a student-centered and collaborative environment for the Humanities reflective of modern practices in the 21st century,” Trinity President Danny Anderson says. “Dicke Hall will serve as the centerpiece of modern teaching and learning on the Trinity campus. This space will provide the technology and tools necessary for our world-class faculty to meaningfully engage with their students.” 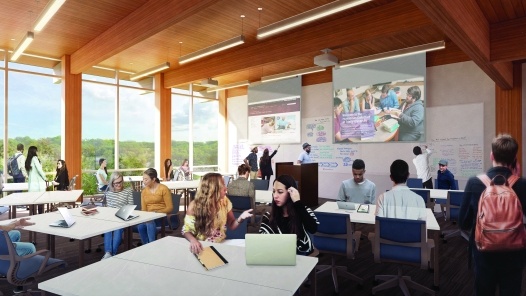 Classrooms in Dicke Hall will be uniquely customized for the teaching and learning needs of their majors and departments, giving students hands-on opportunities to discover new ways of critically thinking, researching, and analyzing.

Tim O’Sullivan, Ph.D., professor of classical studies and co-chair of the Chapman-Halsell Complex and Dicke Hall project, explains, “I feel tremendous excitement when I hear that Dicke Hall is going to be home to the Humanities. I also feel gratitude and am humbled that the Dicke Family acknowledged and can see some of the exciting things that are happening at Trinity and want those to not only continue, but to flourish.”

“When the doors finally open at Dicke Hall, I hope to see a lot of activity—a lot of interaction not only between students from different departments—but also interaction between faculty and their students,” O’Sullivan says. He looks forward to having classes that meet in the new Humanities lab, but also, “having conversations that are spilling out over into the hallway—breaking down some of the artificial boundaries between what happens in the classroom and what happens in the hallways.” 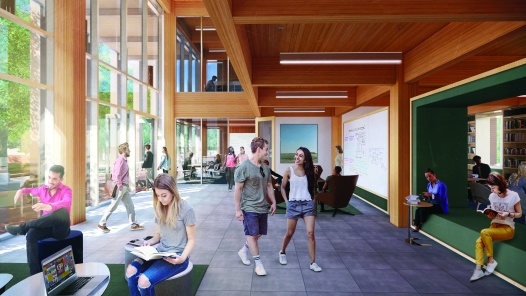 Furnished with comfortable couches and armchairs for reading or studying and tables where small groups can gather, the Humanities Commons will be the centerpiece of Dicke Hall and a destination for the Trinity community.

Dicke Hall, part of the broader overall project called the Chapman-Halsell Complex, will be a defining presence for Trinity on Hildebrand Avenue, and a more visible connection to the San Antonio community. Dicke Hall was designed to honor the architectural legacy of O’Neil Ford who designed Trinity’s current skyline campus and to maintain its 2018 designation as a National Historic District in the National Register of Historic Places.

Ruben Dupertuis, Ph.D., associate professor of religion and O’Sullivan’s renovation project co-chair, describes how extraordinary it was to watch Trinity faculty get excited when envisioning the ideal spaces to teach along with the tools for interacting with their students. “This project started six years ago with an initial conversation about a renovation to Chapman and to Halsell, and what it would mean to interact with other departments, and how we would build spaces that are student-centered to adapt to our changing pedagogies through the years,” he says.

“These are tough times … so it says a lot about the commitment of the University, our donors, and the Dicke family because they believe in what we’re doing,” Dupertuis says.

Dicke Hall is a reality due to the generosity of Trinity alumni Janet (Board Trustee) and Jim Dicke (Trustee Emeritus) for which Dicke Hall is named after, and for gifts from:

Additional, significant support was provided by members of the Board of Trustees, foundations, and the community.

“The nature of a renovation in college is that our current students don’t get to experience the end result after we have picked their brains, which is why we will be excited to host alumni events so we can invite them back and keep these conversations going,” Dupertuis says. “The students are excited–they feel the validation because the University cares about what they have decided to focus on, which is meaningful to them.”

Pandemic conditions, which are still in place on the Trinity campus, prevented a larger community-wide groundbreaking. However, we invite you to view video footage from the Dicke Hall groundbreaking, along with more information on the building project and about Trinity University’s programs and campus.