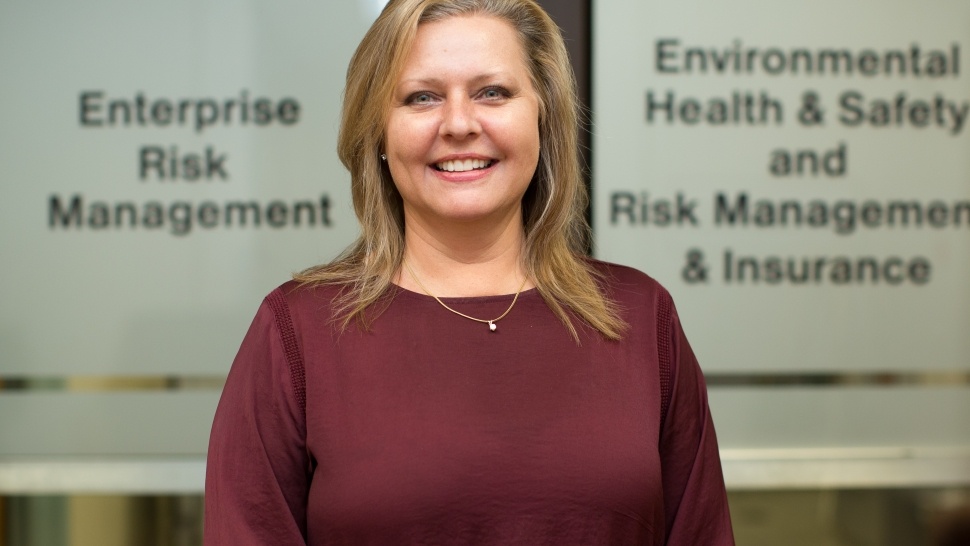 Like many brides, Jennifer Gilmore Adamo recalls feeling nervous when she walked down the aisle of Parker Chapel at Trinity University for her 1996 wedding. She recalls the same emotion welling up when she traveled the same path to receive the Rhea Fern Malsbury Memorial Award, the highest recognition for staff members at Trinity.

As Trinity President Danny Anderson began reading the description of the award winner at the annual Service Awards presentation, Adamo says it took a while for her to realize he was talking about her. He began by saying, “This person touches the lives of every Trinity employee.”

Adamo, director for Risk Management and Insurance, says that’s probably true: “We do touch every area.” She and her team review every proposed contract, event agreement, insurance claim, international travel requests, and more requests from all campus offices and departments, including student groups.

Adamo arrived at Trinity in 1994, reporting to what was then the Personnel Department when former President Ron Calgaard was at the helm. Starting as an employment manager conducting quarterly new employee orientations and handling the advertising budget, among other duties, Adamo became the employment and benefits manager in the renamed Human Resources Department.

In 2010, Trinity created a risk management position, which remained in Human Resources for a year, with Adamo as associate director. In 2011, Risk Management was separated into a stand-alone unit and Adamo was named director. Over time, she was authorized an additional two staff members. In addition to bachelor and master’s degrees from the University of Texas at San Antonio, she studied for, and received, certification as an Associate in Risk Management.

“Every day is different,” she says of her duties. “We don’t have the authority to say ‘yes’ or ‘no.’ We are here to help people on campus (with their project or event) with the least exposure to the university and in the safest manner. We don’t want to be the office of ‘no.’”

One of her nominators wrote that Adamo “exemplifies what it means to be a loyal and committed employee. She approaches every situation with Trinity’s best interest in mind while maintaining an equitable outlook for all parties involved.”

Adamo was also praised for exhibiting diligence for others to complete their tasks with minimal risks while working behind the scenes. “Trinity is incredibly lucky to have a devoted employee like Jennifer,” a nominator wrote.

Rhea Fern Malsbury was a Trinity staffer known for her loyalty and commitment to Trinity. She demonstrated initiative and creativity in resolving difficulties and in improving services while making positive and wide ranging contributions to enhancing the quality of life throughout the University community. The Malsbury award recipient is the one who “goes the extra mile” for Trinity.