The Voice of a Generation
Bob West '78 recalls his role as one of television's most recognizable dinosaurs
Miriam Sitz Grebey '10
Monday, October 1, 2018 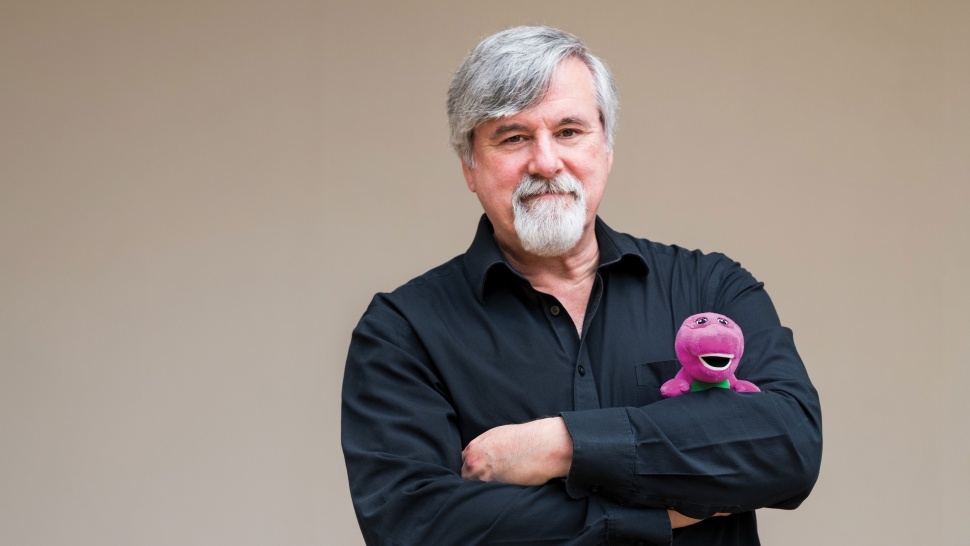 During a dozen sold-out live performances at Radio City Music Hall in 1994, Bob West kept his fans giggling, singing, and shrieking with delight. “It was one of those shows that you dream about, where the audience is totally with you,” he says—even though he wasn’t there with the audience, at least not in the typical sense; while they heard his voice, they never saw his face.

“All three of us dino voice actors were on a level below the stage, but I could hear the audience through my headphones, and I could feel their energy,” he recalls. “Even from inside that sound booth, it was like we were all on stage together.”

West spent almost 12 years playing the voice of Barney, the beloved purple dinosaur. He and an actor inside the plush suit would perform simultaneously, with West singing or speaking along to his colleague’s movements. It wasn’t a typical arrangement—Big Bird, for instance, was voiced and maneuvered by the same person—but it allowed each person to concentrate on his own component of the act. “We joked that we would trademark the name of it: DinoSync,” he says.

Beyond the live shows, TV episodes, and videos, the job also entailed recording songs and talking toy scripts and traveling for personal appearances across the world. West recalls how Sheryl Leach, Barney’s creator, referred to the height of the show’s popularity in the mid-90s as the character’s “Elvis years.” “When Barney would make an entrance, that felt pretty accurate,” West says. “Lots of love from the little fans!”

West, who now lives in Los Angeles, grew up in Finleyville, Pa., and Baytown, Texas. While visiting Trinity as a prospective student, he stayed in a room on the first floor of Winn Residence Hall. “That’s when I knew I’d found my college home,” he says. He ended up living on that same floor and cites “the dorm life” as one of the formative aspects of his college career. “Having that many peers around you can be a turbo-charger for the engines of your mind and heart,” he says. “Let that environment wind you up and spin you out into the world at full speed!”

He majored in art and enjoyed a wide range of activities, serving as a student representative, working for Residential Life, and singing in an a cappella group called the Serenaders (which he calls “a college career unto itself”).

As a child, West loved imitating accents, dialects, celebrities, and public figures, including Richard Nixon and Spiro Agnew. “Watergate was going on while I was in high school,” he says. “You had to have a Nixon if you were going to do impressions!” It wasn’t until college, though, that he saw his skill as a path toward a career. He made a “ridiculously long, goofball voice demo,” with a classmate in the University’s recording studio and shopped it around to ad agencies in town. “That cassette tape actually got me my first voiceover work and my first agent. So, thanks, TU!”

In the decade after college, West had an active career in commercial voiceovers, once recording four jobs in three different Texas cities in a single day. That busy schedule prepared him for the next phase of his professional life, when he simultaneously worked on Barney and voiced two of Chuck E. Cheese’s animatronic characters: Jasper T. Jowls and Pasqually P. Pieplate.

For the last 15 years, West has worked in creative direction and graphic design for television and film. He’s currently a graphic designer on two ABC shows, including Speechless, which he calls “a natural follow-up to Barney in some ways, because it’s all about inclusivity and understanding.”

West feels honored to have been part of so many children’s lives as the voice of Barney “because the character is able to connect with all kinds of kids around the world.” He remembers receiving letters from parents who said the show had helped their child deal with illness, divorce, or other difficult times.

“Mothers with kids on the autism spectrum would write to say that Barney really helped their child to open up,” West recalls. “When a parent thanks you for helping their child to say, ‘I love you, Mommy,’ unprompted, for the first time, that’s something that will stay with you for life.”