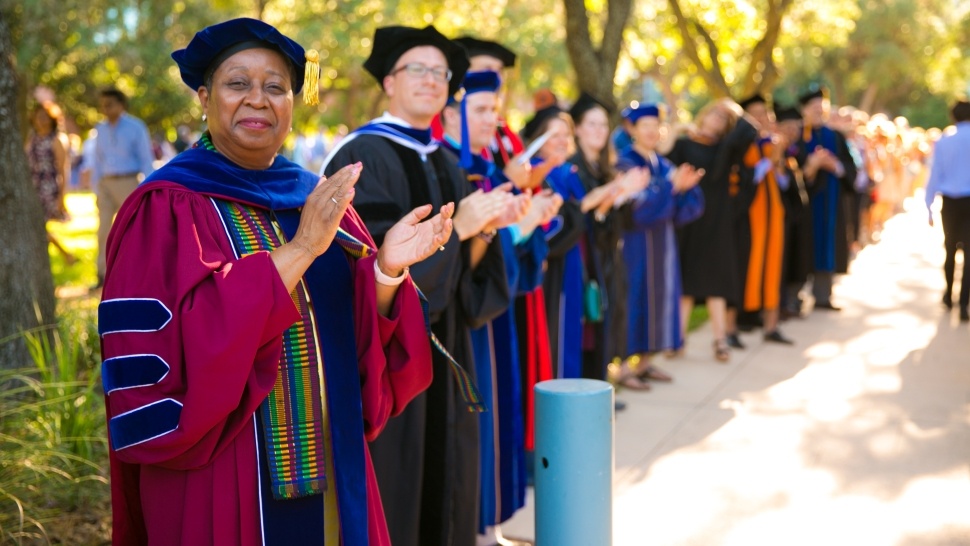 Trinity University Vice President of Academic Affairs Deneese Jones will be inducted into the 2018 Educators’ Hall of Fame on Saturday, April 14.

The honor is being bestowed by the Gamma Tau Chapter of the Phi Delta Kappa national educational sorority. The local chapter’s Hall of Fame spotlights and recognizes outstanding educators in the San Antonio area. Jones was selected in recognition of her hard work and dedication.

“I am humbled and honored to be recognized for doing the work that I love,” Jones says. “My service as an educator is grounded in my belief that a true education is the great equalizer in a nation of inequities. I find hope in the service of educating.”

In 2016, Trinity President Danny Anderson appointed Jones as the University’s chief academic officer to oversee all academic programs, the development and mentoring of faculty, and implementation of the University’s strategic plan Trinity Tomorrow and the Pathways curriculum.

A native Texan, Jones received her bachelor of science from Texas Woman’s University and her master’s and doctorate from Texas A&M University, College Station.

Founded in 1923, Phi Delta Kappa’s purpose is to stimulate professional growth among educators, promote the highest ideals of the teaching profession, and to encourage the development of the potential of youth. The organization has more than 5,000 members associated with 115 chapters throughout the United States, Barbados, British West Indies and Monrovia, Liberia, and West Africa.