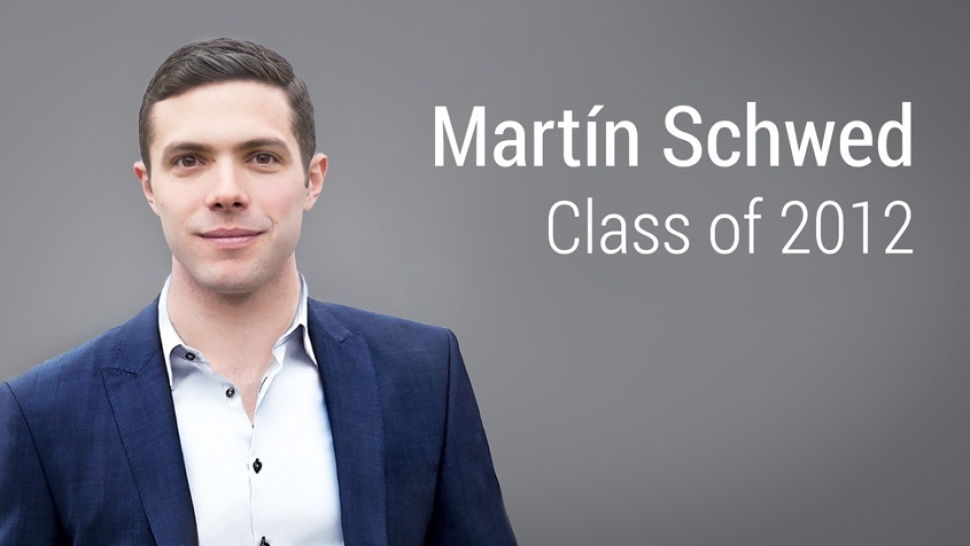 Beneath The Surface
Geosciences alumnus Martín Schwed is a technical geophysicist at Chevron
Carlos Anchondo '14
Monday, May 8, 2017

As a high school senior, Martín Schwed ’12 knew the type of university he wanted to attend. He sought a small, liberal arts college where he would receive a personalized education. At a Trinity admitted students day, Schwed struck up a conversation with geosciences professor Glenn Kroeger, who offered him a private campus tour. The pair chatted about Schwed’s interests and visited a variety of academic departments, where Kroeger personally introduced him to campus faculty members.

“Dr. Kroeger spent the better part of an afternoon walking me around campus,” says Schwed. “That really cemented for me the sort of attention and level of commitment a student at Trinity would receive. He went above and beyond.”

Although he first considered majoring in political science and Chinese, a first-year environmental geology course attracted Schwed to geosciences. Soon, he couldn’t get enough. As luck would have it, Kroeger became his academic adviser and steered Schwed into a concentration in geophysics.

Today, Schwed is a technical geophysicist with the Chevron Corporation in Houston. He currently works in the Deepwater Exploration & Projects Business Unit and primarily focuses on the Gulf of Mexico. In partnership with geologists and engineers, Schwed builds intricate digital models of the Gulf’s subsurface to locate possible accumulations of oil and gas. Geophysical acquisition contractors use multi-kilometer-long cables, deployed from ships, to emit sound waves into the Earth through the water column. Terabytes of raw data are then returned to Chevron, where Schwed and his team get to work.

In this challenging technical environment, Schwed relies heavily on communication skills honed at Trinity to accurately synthesize and present the findings.

“In every Trinity class we were expected to present and defend our ideas, whether it was through written papers or class presentations,” says Schwed. “That translates nicely into my collaborative work environment today where I constantly have to express my technical work and defend it.”

While Trinity does not have a specific program for geophysics, Schwed was able to apply rigorous technical Trinity lab work to a series of notable internships. One summer he interned at Miami University in Oxford, Ohio, through the Incorporated Research Institutions for Seismology, or IRIS. Schwed studied earthquakes in Alaska and subduction zone processes, concentrating on non-volcanic tremors. He then presented his findings at the American Geophysical Union (AGU) conference in San Francisco, later turning that research into his Trinity senior thesis.

In 2014, Schwed earned a master’s in geology from Baylor University with a concentration in geophysics. He began working at Chevron shortly after graduation and has now been with the company for nearly three years. Houston is home, and Schwed enjoys the city’s music scene, area restaurants, and playing sand volleyball in a league. Additionally, Schwed is an active member of the Houston Chapter alumni board. He recently served on the host committee for the inaugural Trinity National Conference for Alumni and Parents, which took place April 8.

“I joined the Houston board to give back to the Trinity community, but also for the professional and social networking aspects,” says Schwed. “It can be easy to overlook the networking impacts of local alumni groups, but if you are intimately involved you gain a lot more exposure to people who may be able to help you from a career standpoint.”

Although still relatively new in his position, Schwed appreciates that his job is “intellectually stimulating.” He enjoys understanding the true power of Chevron’s innovative technology and using it to find the answers to unknown problems. In addition to to seismic imaging and modeling work, Schwed also finds time at Chevron to volunteer. Twice a month Schwed and colleagues put together sandwiches for a local homeless shelter and once a year they volunteer with Habitat for Humanity, an organization Schwed also volunteered with as a Trinity student.

Looking back at his Trinity years, Schwed wishes he could have spent time in the Center for Sciences and Innovation (CSI). At the same time, he recognizes that the involvement of Trinity undergraduates in groundbreaking research has stayed consistent – no matter the building or lab. Where else, he asks, are undergraduates regularly listed as key contributors on scientific papers?

And while CSI didn’t yet exist when Schwed took his admitted students tour, the mentorship of faculty like Kroeger still remains a hallmark of a Trinity education. In Schwed’s words, it’s the “personal touch that’s still the same.”