This spring, a diverse class of Trinity students banded together to create a colorful, dynamic “Discovery Cube”  for The DoSeum, recently named the top children’s museum in America by USA Today.

The project, a modular series of machine-crafted, interlocking boxes, was constructed as part of an interdisciplinary class called “Academic Making for the Built Environment” and was meant to inspire children to think creatively about the concept of STEAM (Science, Technology, Engineering, Art, and Math). But examine the Trinity group’s creative process, and you’ll see every member of the class got to build something equally as impressive: more dynamic versions of themselves.

“The class was this unexpected-but-obvious pairing between the engineering and art worlds,” says human communication and theatre professor Scott Neale, M.F.A., who co-taught the class alongside art professor Kate Ritson, M.F.A. “As artists, we're used to constantly innovating new ways and using new tools to create the physical embodiment of a creative idea.” 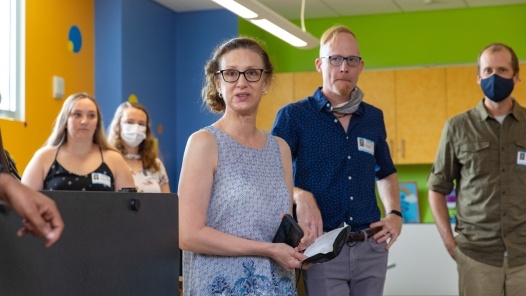 The grant opportunity was brought to their attention by Carlotta De Bellis, former Post-Baccalaureate Fellow at the Collaborative for Learning and Teaching, who took the initiative to help prepare the team for writing the proposal. Carlotta’s enthusiasm and determination was the driving force for applying to the grant. The course is the latest in a growing surge of Trinity classes that utilize the University’s Makerspace, a unique, state-of-the-art machine shop where students of all majors can create together.

While Neale says “Academic Making for the Built Environment” had always intended to result in a semester-long project, it wasn’t until he was approached by one of Terrell’s contacts at San Antonio’s DoSeum, a vibrant children’s museum just a few blocks east of Trinity’s campus, that the class found its objective: to create a interactive, mobile display for the space that would help The DoSeum with a variety of programming needs. 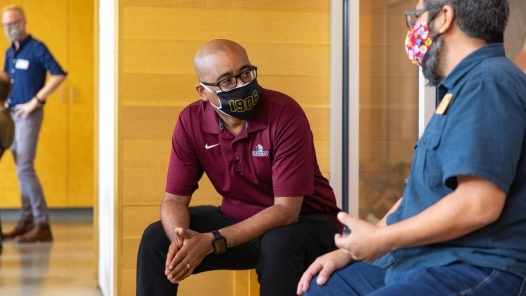 Terrell, center, was an instrumental advocate for the partnership between Trinity and the Doseum

Initial discussions for potential partnerships started between Terrell and DoSeum staff in spring of 2020, but stalled due to COVID. “Two of our strengths as an institution is the ability for interdisciplinary collaboration, and creating experiential learning opportunities for our students. We saw the Art/Theatre course as a perfect opportunity to leverage our strengths to restart those talks with The DoSeum.” says Terrell.

The assignment seemed simple at first: the group wanted to tell the “story of STEAM,” Neale says. But leveraging the class’s diverse talents, as a group with students from backgrounds in the arts, theater, engineering, math, and more, proved a challenge in and of itself.

“The one thing that we really drove our students to think about was narrative, finding a narrative and telling a story with this thing,” Neale says. “We noticed that the students who came from a more of a math and science and engineering background were challenged at first with creating that narrative. Whereas the students that had some theater background and art background really could embrace narrative creation but were challenged by some of the technical aspects such as, ‘Well, how do I visualize that in orthographic views?’”

Anthropology major Sofía Muñoz ’23 and engineering science major Tristan Arias ’22 exemplified these challenges , but also the growth that comes with getting pushed out of comfort zones. That’s a hallmark of Trinity’s approach to the liberal arts, where presumed weaknesses actually become strengths.

Muñoz also minors in theater and museum studies, and she eventually wants to work doing exhibit designs for museums. She was initially excited to work in the Makerspace, but also a bit terrified to see all the advanced equipment inside for the first time: “It was definitely intimidating. I was terrified that I was going to break something— that was the main fear,” she says. “But once, with the help of the engineering science teaching assistants and of course Ryan Hodge, I felt a little bit more confident using the [laser] cutter and some of the harder tools.”

Muñoz and the rest of the class ended up using equipment such as a CNC router for milling and cutting; a 3D printer to create the “feet” that helped the display be mobile; a Rayjet laser cutter for etching designs; and design software such as Adobe Illustrator and Fusion 360. Early on in the class, the students were divided into small subgroups, each responsible for a different aspect of the build. Muñoz’s group was placed in charge of the aesthetic of the project, picking colors, shapes, and general design elements. While the work was fun, “it got challenging at times,” Muñoz says, pointing out that her team had to troubleshoot everything from color issues (white was the original color choice, but got dirty too fast) to material concerns (cutting foam material took longer than expected because the laser cutter melted it).

During these moments of crisis, Muñoz leaned on the interdisciplinary aspect of the class, both with the faculty and with her teammates. “Having kind of those moments where I was kind of brought back down a little bit, and getting a little bit more grounded, I think was definitely a huge part of what the engineering students brought,” she says.

And when those engineering students had their own challenges, Muñoz was able to return the favor: “It was really fun and interesting being able to sit down with some of the engineers and be like, ‘Okay, this is physically super cool. The way this [device] unfolds is really cool, but what's the theme? Like what are the cute things about it? What's the aesthetic?”

For engineering science major Tristan Arias ’22, getting asked these questions was a refreshing twist on the engineering design process. But at Trinity, engineering is different by design.

Trinity’s engineering science major doesn’t force students to fully commit to either chemical, electric, or mechanical tracks, instead drawing on elements of all three. And they get to spend all four years with at least one design component.

So for Arias, who plans on going to graduate school for engineering, the draw of the DoSeum project was getting the chance to redesign his personal approach to problem solving.

“It was always a really big struggle for the engineering majors in the class to think thematically, and think about, if we're making this for a four-year-old child, how do we inspire wonder and interest in a young child's mind?” Arias says. “But the nature of the course forced us all to think more creatively.”

As they worked with the non-engineering science majors, Arias says his team began to get a stronger grasp on the narrative side of things.

“The final idea was very much focused on a little bit of mystery,” Arias says. “There’s a little bit of the incorporation of nature as an encapsulation of STEAM itself. There’s this idea that if you look at the natural world, you will find science, technology, engineering, art, and mathematics all in there. So, we were trying to take this design, letting mystery and nature be a base for something really flexible that the DoSeum would be able to use.” Arias, Muñoz, and the rest of the team’s final vision eventually centered around the concept of a “discovery cube”, where kids could discover various items inside boxes themed around all five STEAM categories. The creation ended up becoming a large, modular set of interlocked boxes, each branded with imagery related to one of the five STEAM categories that museum staff can move freely, stock with new items according to programming needs, and even rearrange to fit different rooms and spaces. The display also packs neatly for transport to various locations within the DoSeum.

The creation, well-received by DoSeum officials at its unveiling, is a testament to the interdisciplinary leadership of Ritson, Neale, and Hodge, both students say.

“Their dynamic was very interesting,” Muñoz says. “They definitely complemented each other. Kate was very much about thinking bold and big. And Scott helped us narrow ideas down to where they could work. I would just kind of dream big dreams that sometimes weren't physically possible.”

And identifying dreams that were physically possible was where Hodge stepped in, Neale says: “Kate [Ritson] and I would sit here and work with the students and say, ‘You know, it would be cool if we could do this, or that.’” Neale says, “And then we all turned to Ryan [Hodge] and immediately asked, ‘Okay Ryan, how do we do this?’”

“Ryan [Hodge] really felt very much like the mechanical expert,” Arias adds. “Physically, how is this going to work?

For the students, the class also ended up being a chance to discard some roles that they might have seemed typecast for in other environments.

“For the students that were not engineering science majors, they got used to thinking more mechanically,” Muñoz says. “And I feel a lot of the engineers took away from the course that physical items can convey narrative. That's really important to me as someone who wants to go into museum exhibit design, where museum exhibits are both a narrative and a built environment.”

In a liberal arts environment like Trinity, silos and divisions fall down so new creations can rise— slowly and steadily as a 3D-printer setting down layer after layer of material.

And Arias, by the end of the class, noticed each of his teammates branching outside their previous strengths to develop new ones.

“As the project went on, basically all students’ roles sort of melded together, because the responsibilities all were super-adaptable,'' he says. “The needs of the project didn't fall neatly into these categories that we started with. So everybody ended up getting hands on with everything.”