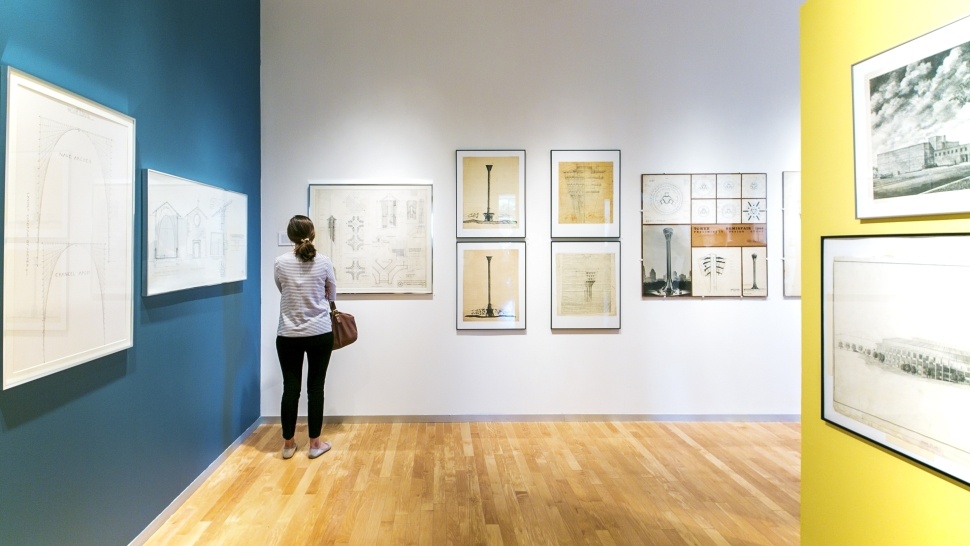 In the last week of May, a Trinity urban studies major found himself in a dark and musty basement. His search had so far been fruitless, but when he opened a drawer and found a series of presentation drawings of the original Northrup Hall, he knew his summer was going to be a memorable one.

Trinity University’s iconic red brick buildings are woven together and into the landscape in a way that feels like the obvious solution to campus design—so it is a curious footnote of history that what exists today was not at all what was originally envisioned for the University. When Trinity moved its campus to San Antonio in 1942, the intent was to build a traditional campus with Georgian buildings and formal malls. This proved to be too expensive, and so the University turned to local San Antonio architect O’Neil Ford to develop an alternative approach.

The histories of Trinity and Ford have been intertwined ever since.

Ford became known for crafting buildings that made use of modern construction techniques while still incorporating traditional materials and details. This sensibility governed Ford’s approach to the early planning of Trinity’s campus in which he embraced the topography of the former quarry while deploying modern design principles.

“In the 1950s Trinity was a bold, adventurous architectural patron,” says art history professor Kathryn O’Rourke. “As the University reinvented itself at its new site, trustees and administrators, most notably President James Laurie, resisted trends and embraced O’Neil Ford’s architecture as a centerpiece of the institution’s identity.” 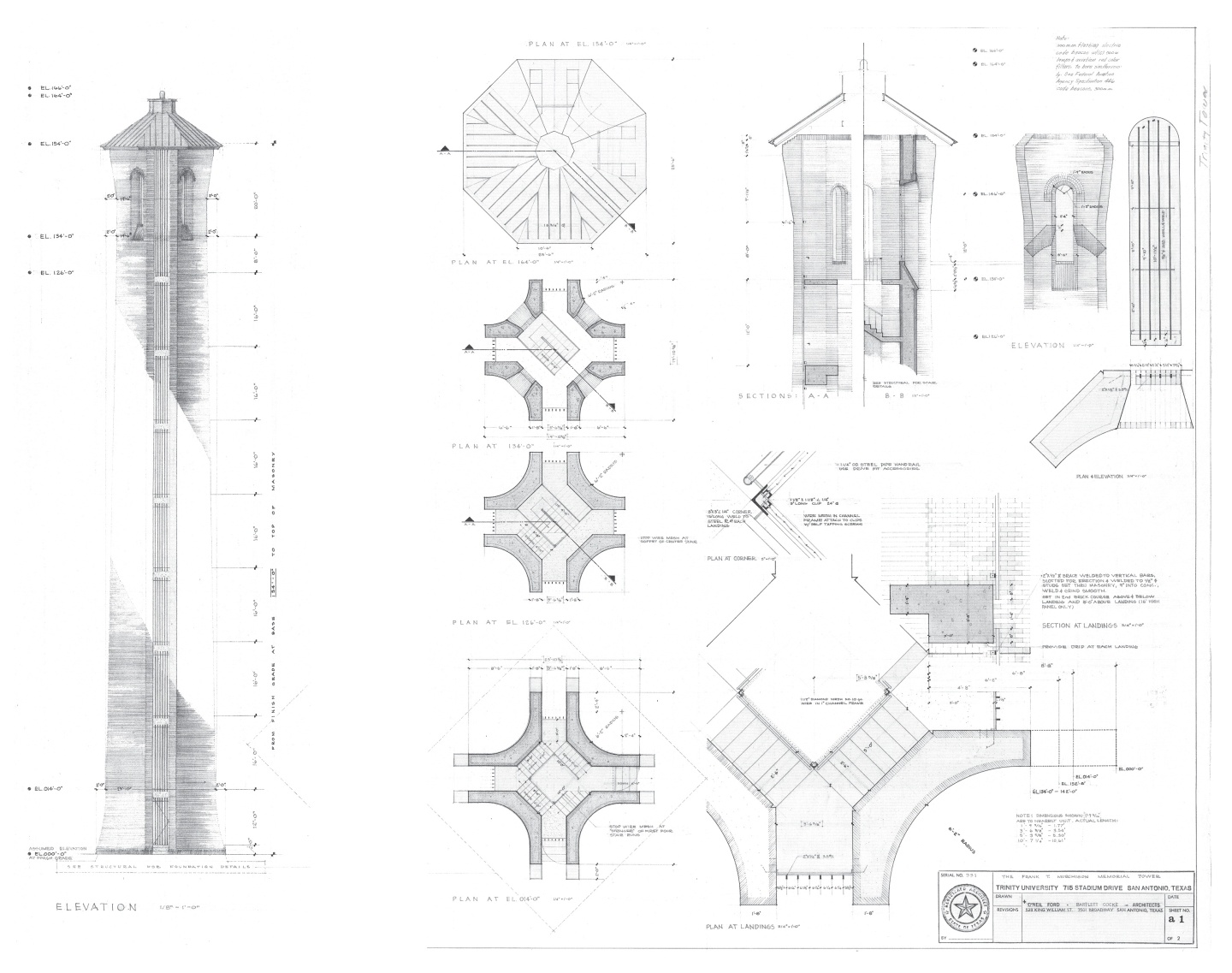 Ford’s early work at Trinity was influenced by his close relationship with Trinity Trustee Tom Slick. In addition to being a successful oilman and inventor (not to mention a noted adventurer and Yeti hunter), Slick had developed a cost-effective construction technique where a building’s upper floors and roof were first built on the ground and then lifted into place. When left exposed, these slab elements created the horizontal lines that became a recurring theme throughout Trinity’s campus.

For over three decades, Ford crafted some of Trinity’s most important buildings, including Murchison Tower and the adjacent Parker Chapel. Although his contribution to the campus helped etch Trinity’s place in San Antonio, the drawings that documented his early designs were assumed lost.

In the spring of 2014, Jason Azar ’16 enrolled in Studio Trinity, an interdisciplinary architectural design course offered through the art and art history and urban studies departments. The semester began with a series of field trips to local design firms, including the offices of Ford, Powell & Carson, the firm originally established by O’Neil Ford. Azar, an urban studies major and art minor from Austin, later leveraged that visit into a summer internship.

Although the task he was given that summer did not sound exciting–he was asked simply to clean out the basement–he took seriously his job of sorting through and identifying more than 1,000 drawings.

“I was actually really excited the first time I saw the basement,” Azar said. “After opening just a few drawers I realized how fantastic the drawings were. I looked forward to every day after that because it was like a treasure hunt.”

And treasure was indeed found.

As the summer progressed, Azar began to uncover many of the drawings that were feared lost, including sketches and design studies of many of Ford’s most enduring works at Trinity. Early renditions of the Murchison Tower, Parker Chapel, and Coates University Center depicted how Trinity’s campus could have looked—and how it grew and developed into the campus of today.

A collection of these drawings was exhibited at Trinity during the fall semester. “Education by Design: Drawings from the Collection of Ford, Powell & Carson, 1939-1970” showcased a series of projects related to education. Although the show illustrated buildings from Trinity’s past, it also demonstrated the power of architecture to propel a University forward. 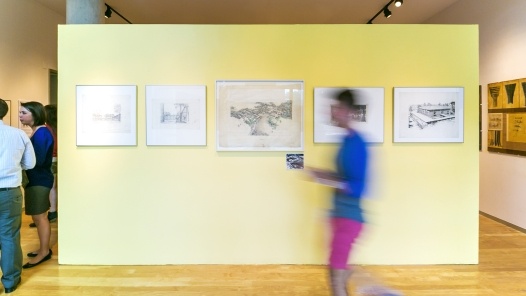 Drawings from the Collection of Ford, Powell & Carson, 1939-1970” in the Michael and Noemi Neidorff Art Gallery on September 18.

According to O‘Rourke, who co-curated the exhibition, “Ford was a consummate teacher, and he believed that architecture and design should serve people and be forces for social progress. It is our hope that the show helps people understand how architecture, education, and civic life can be profoundly connected, and that it will help them see in new ways.”

For Azar, his summer in the basement of Ford’s old office was profoundly transformative. “I certainly feel a stronger connection to both Ford and Trinity after seeing the original drawings and understanding how the campus developed,” Azar said.

“The physical design of the campus is what originally drew me and many other students to Trinity,” Azar said. “Being on Trinity’s campus sparked my interest in how good design can make a place pleasant and desirable.” 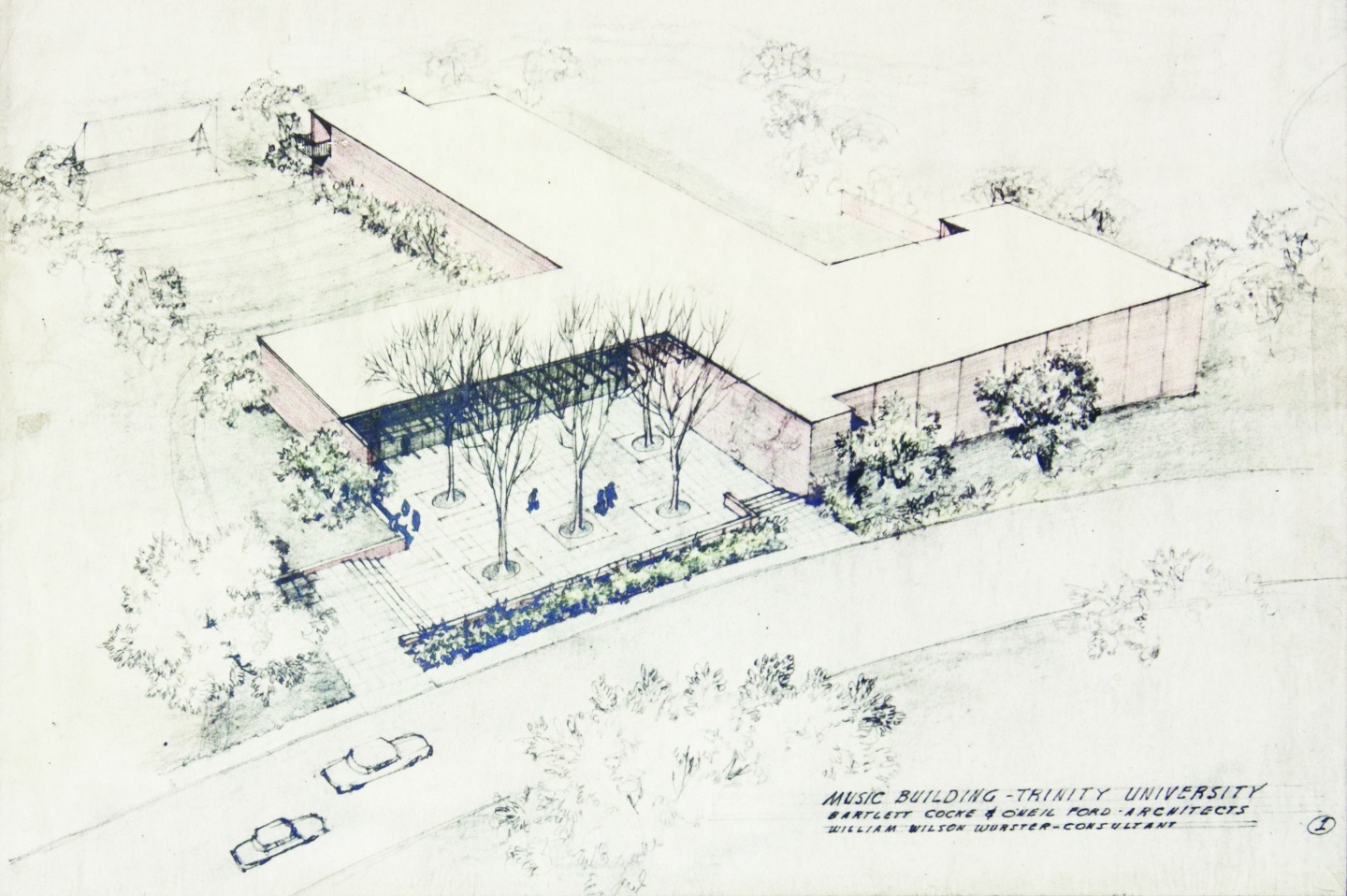