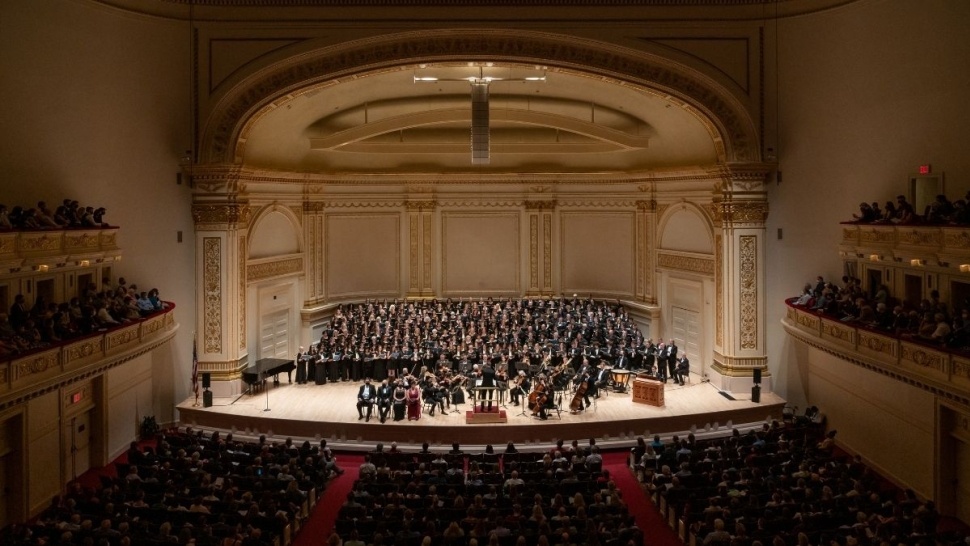 Singing in New York City’s famed Carnegie Hall is as prestigious as it gets for any vocal performer.

And it sure beats singing through a mask in a parking deck, says Olivia Wehrung ’22.

“Singing at Carnegie is a once in a lifetime opportunity,” says Wehrung, who joined a group of Trinity students in a cathartic and memorable sold-out performance at the venue June 13. “Being shoulder to shoulder in Carnegie Hall, barely a year after we had to constantly measure 6 feet between each other just to practice in the parking garage under Northrup, is a testament of how much things have changed for us.”

The trip saw Trinity’s director of choral activities, Gary Seighman, DMA, lead a group comprised of both current and former students into Carnegie, staging both an individual performance and serving as the core ensemble for the large festival chorus performing Mozart's Requiem with the NY Chamber Orchestra, during which Seighman made his Carnegie conducting debut. Both performances were met with standing ovations.

You might think this group, known as Trinity’s Chamber Singers, are all on course for professions in music. But many of them—as is the case with most students in musical ensembles at Trinity—aren’t even music majors.

That’s music at Trinity—where amazing experiences happen in harmony thanks to an inclusive, versatile liberal arts approach; a commitment to musical excellence spurred by dedicated, acclaimed faculty; and a strong community of social and financial alumni support.

More Than Major or Minor

Take Allison St John ’20, a chemistry major who joined Trinity’s choral program, Chamber Singers, and handbell ensemble during her time at Trinity, as well as a student-run a cappella group, is one such student. She’s now working on her Ph.D. in chemistry at the University of New Hampshire, but she jumped at the chance to reunite with her musical counterparts on this trip.

“This was really kind of amazing that this trip came together, and I was super excited to be a part of that,” says St. John, who also was part of life-changing choral trips to China and Austria. “It's always wild, especially because I'm not really a musician in career prospects. But I've gotten to do some really amazing venues at Trinity. So it's always really surreal, almost as if I don't feel like it's really my place. That was exciting to me about this trip as much as it was getting to sing with Trinity singers again.” 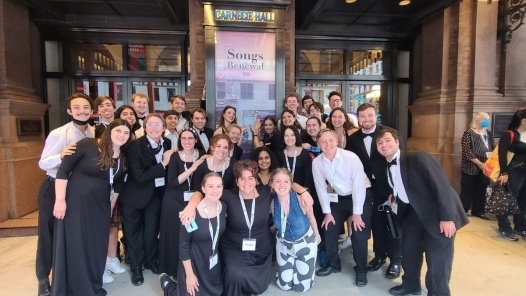 Even Wehrung, a music education major and a teaching minor who is pursuing a career in music as an instructor and conductor at Trinity’s MAT program, struggled with her own sense of imposter syndrome on the trip. That’s enough of a challenge in performing at a venue like Carnegie. But adding to the pressure for Wehrung was that she actually got to make her own conducting debut at Carnegie, as Seighman surprised her with the chance to conduct a segment of the Chamber Singers’ performance.

“One of the pieces that Dr. Seighman chose was one that I actually conducted in our spring concert. He gave me the opportunity to conduct that at Carnegie Hall as well, which was absolutely incredible,” she says. “At Trinity, there's just so many opportunities in every department, regardless of your major—and you just have to take them. You don't let the imposter syndrome scare you away, because these are often once in a lifetime opportunities.” 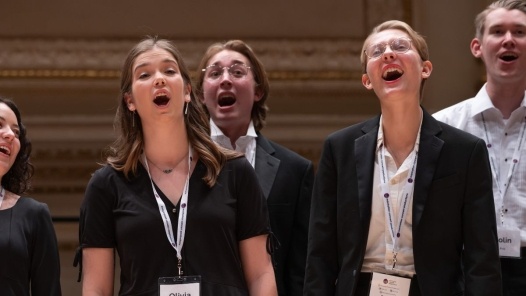 Perhaps one of the most vital of these opportunities for the Tigers on the trip was the chance to reconnect with a close-knit Trinity community of classmates and alumni.

In addition to nearly 20 Trinity alumni from earlier decades, many recently-graduated singers joined the students on this trip, thrilled to be seeing their friends again after many never got to come back to campus in spring 2020, or had trips postponed and classes held over Zoom or distanced over the course of 2021.

“It was tough for many to simply part ways mid-year back in March 2020 without any sense of closure—especially while we were in the middle of two big projects, one of which was preparing to perform at Carnegie Hall that summer,” Seighman says.

“It was a wonderful sense of closure, especially for the 2020 grads, because their time at Trinity ended so abruptly,” Wehrung says. “And then the ’20, ’21 grads…didn't go on tour, and we didn't have any in person concerts. I was speaking with a lot of them and they all expressed similar sentiments of how it was the closure they all needed from a really tumultuous end to their college experience. “ Trinity choir members practice in a parking lot on campus in 2020 as part of COVID-19 distancing precautions.

Reconnecting was vital to the group’s musical success, too. Musically, the group was on an uptempo pace from the start, racing to rehearse more than an hour of music over the span of just a few short days. And they did this as a group of singers who, on the whole, had not sung together before. For Seighman, this was the perfect challenge for a Trinity community that thrives on collaboration.

“Our choirs really provide a sense of family for many of our students, a home away from home,” says Seighman, “I vividly recall being in my [Carnegie] dressing room resting my eyes and sitting on the couch directly underneath a framed picture of Leonard Bernstein, an enormous figure in our profession who performed regularly on that stage. I did reflect back on the journey the past couple of years and how this sure beat our various makeshift rehearsal spaces. Yet at the same time, it was those challenging experiences that strengthened our group over the past couple of years to create a tighter bond musically and socially, two aspects so intertwined.”

That’s not to say the trip was all about the performance. In addition to seeing the usual sights of New York City, the group also attended a Broadway show as part of their stay and even got the chance to connect with the Dicke family, a longtime source of inspiration, energy, and support for music and so many other aspects of Trinity, Seighman says. 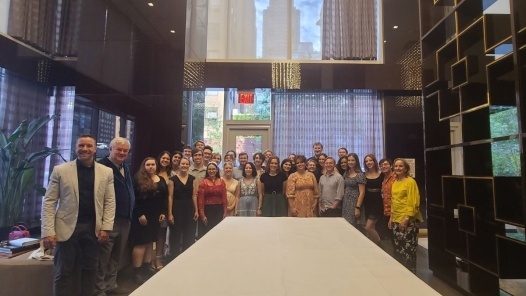 Trinity University singers meet with the Dicke family during their trip to New York City in June 2022.

Seighman and the Trinity singers, knowing that the Dickes had a residence in NYC, invited them to attend the Carnegie Hall performance, along with fellow alumna Erika Zetty '77, who recently established an endowment for the choir program to honor her late father and former Trinity choir director, Claude Zetty.

“Janet Dicke reached out to me several weeks before our trip with the generous offer of organizing a dinner reception for the choir during our time in the city,” Seighman notes. “That Saturday night, after a long day of rehearsals and before our singers attended a Broadway show, we all enjoyed the wonderful company of Janet and Jim and got to share many musical stories. After dinner, we sang Trinity's Alma Mater for them.”

A Bass to Build On

In addition to the generosity and musical warmth of the Dickes, Seighman also notes the integral role of the Dickson-Allen foundation in the success of the trip.

Remember those trips to Austria and China that St. John mentioned earlier? These types of “once-in-a-lifetime” trips that define music at Trinity keep happening multiple times in students’ lives thanks to this powerful level of financial support.

“Our singers and myself are thankful for the generosity of the Dickson-Allen Foundation who has supported so many of our initiatives over the years. These experiences really have enabled Trinity students to share their musical talent to the world, putting us on the map and being a destination for young aspiring musicians,” says Seighman, noting that the Dickson-Allen Foundation were the main supporters of this trip from the very start. “After the [trip’s] first cancellation [during the continuing pandemic in 2021], we were very thankful that the Dickson-Allen Foundation not only guaranteed support of the rescheduled opportunity, but also helped ensure participation of those original students who graduated since then.” 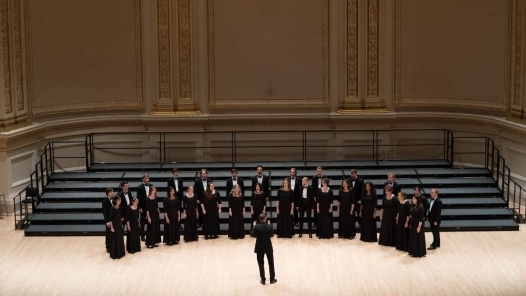 As important as alumni support and connections were to this experience, the students have each pointed to Seighman himself as an equally vital source of energy for their ensemble.

St. John says the entire group of Chamber Singers knew what this type of prestigious performance meant for Seighman, an acclaimed conductor beloved by students for his ability to create personal connections.

“What made me feel a lot of emotions on this trip was getting to rehearse with (Dr. Seighman) again because he really cares so much about every single person in the room,” she says. “He makes you feel so seen in rehearsals, even when he's looking out at 240 singers. I care about him so much: he's just the best person, so I hope that he feels really, really good about his debut.” Usually, Seighman says that when he’s conducting a performance, there is rarely anything else drawing his focus away from the music and the musicians in front of him. But as monumental as this musical moment was, Seighman says he allowed himself one brief moment to enjoy the moment on his own terms.

“I tend to let myself go to the music and don't remember how I might ‘look’ to the singers or the audience during the actual music making,” he says. “The experience of standing on that podium in front of a sold-out Carnegie Hall was absolutely surreal. While conducting the ‘Lacrimosa’ movement (of the Mozart piece), one of the most recognizable parts in the entire work, I slightly glanced over my right shoulder to catch a glimpse of the hall and audience just to take in the moment for myself. I wanted a snapshot memory of that experience!”

Each member of the trip says they wanted to take similar mental snapshots of this performance, to replay this memory over and over again.

“This felt weird,” St. John says. “I just watched a video of Julie Andrews singing on the same stage I was on, which is just ‘wow’ to me. Anytime from now on I see anything at Carnegie Hall, I’m going to be like, ‘Oh my God, I was there.’” As Wehrung soaks in the Carnegie experience, she says she’s starting to feel less like an imposter, and more like someone who belongs on the big stage.

“This is the world's most famous stage, and having the opportunity to sing there was already cool enough, but getting to conduct was a once-in-a-lifetime opportunity that some people don't even get to have once. And I got to have it at the age of 22,” Wehrung says.

And if you stop to think about the fact that a 22-year old musician has already had multiple life-changing musical moments at Trinity, you might realize that Trinity’s version of “once in a lifetime” may not mean “only once in a lifetime.”

"I'm thinking about pursuing a master's and a doctorate in conducting because I want to conduct college choirs," Wehrung says. "Dr. Seighman tells me that this won't be my only time conducting in Carnegie Hall, so this trip felt, for me, like a little sneak peek into what my future holds." 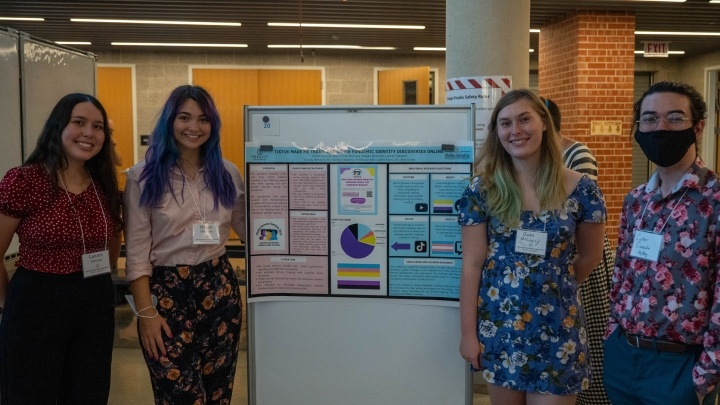 Thursday, August 11, 2022
If you’ve had to shelter in place or isolate during the COVID-19 pandemic, you…
Students
Faculty 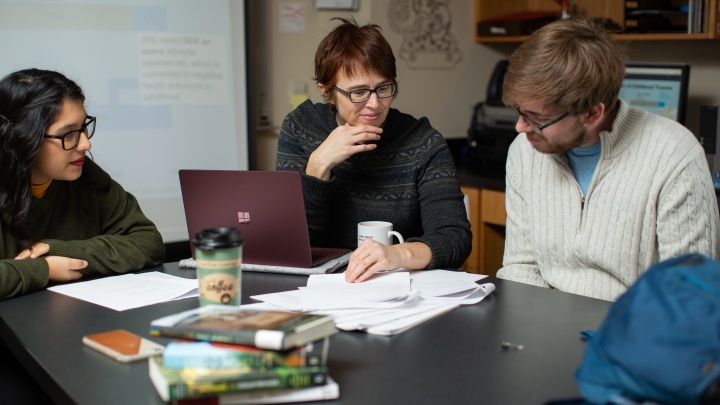 Finding a Home for LGBTQ+ Youth

Tuesday, June 21, 2022
When LGTBQ+ youth are kicked out of their home by their parents, where do they…
Faculty
The Trinity Story 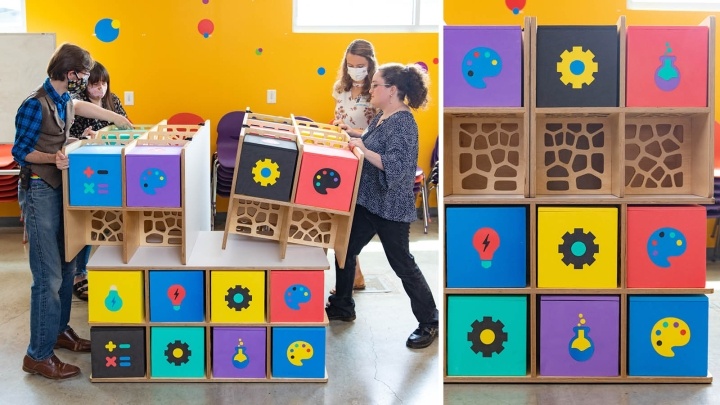 Thursday, June 16, 2022
This spring, a diverse class of Trinity students banded together to create a…
Trinity Perspective
Students