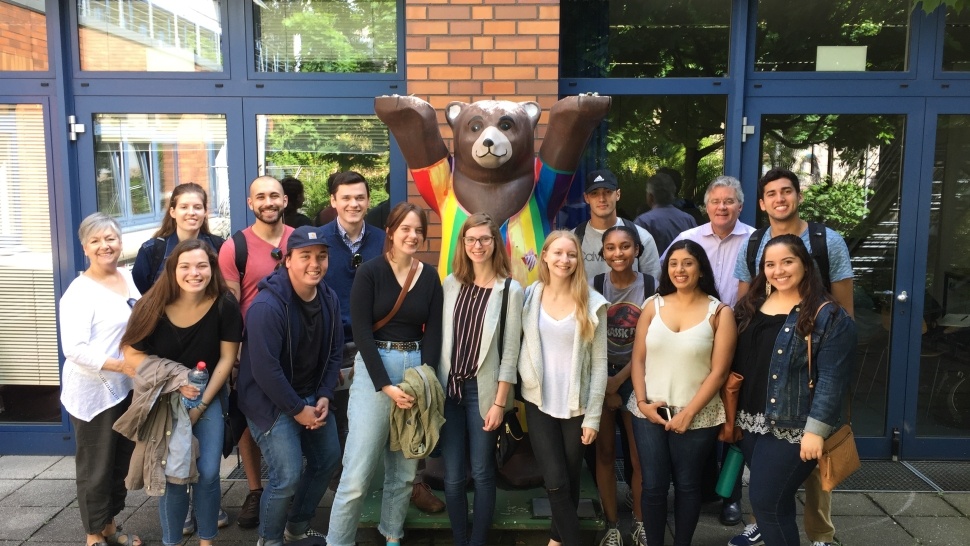 Professor Peter O’Brien, Ph.D., relaxes at his flat in former East Berlin in Prenzlauer Berg, a borough where he and his partner, Jane, bump into longtime friends daily on their way to the market or to the local tennis club.

“We stupidly did not buy a place after the Wall fell and have ever since rented from friends and acquaintances,” says O’Brien, who has guided Trinity undergraduates through an immersive faculty-led study abroad course, Global City Berlin, in May since 2015.

His two-week curriculum blends lectures with first-hand research experiences throughout Berlin, an increasingly diverse city of more than 3.5 million people which serves as a crucible for influential forces including globalization, immigration, and nationalism.

“Large-scale immigration, in particular, has brought together people of diverse nationalities, languages, religions, races and cultures who in earlier times would most likely not have inhabited the same space,” says O’Brien, who wrapped up the program’s fourth year last month. “Most metropolises of the affluent North are no longer national, they are global cities. Berlin is no exception.”

Gaining first-hand experience of historically significant places is what catalyzes learning, O’Brien says. Traversing Germany’s capital by bus and by metro, 13 students visit national landmarks, museums, memorials, and places of worship. Top sights include The Wall Museum, the East Side Gallery, and the German Bundestag — the national parliament of the Federal Republic of Germany.

“Some concepts  — coalition governments is an example — are more challenging than others to grasp for students who have grown up with a two-party political system,” O’Brien observes. “If that isn’t something you’ve been exposed to, it can be unclear why people in parliament are doing the things they are doing.”

Encouraging curiosity and critical thinking, he instructs students at the end of each day to write a reflection in a collaborative blog, and to include a photo with each entry.

“We began the day with a lecture on the politics of immigration,” Oliver writes, saying the talk was held in a neighborhood mosque — the first mosque built in former East Germany, which met protesters, when it opened in 2008. The group dialogued on topics such as Islamophobia and mosque-state relations in Berlin.

Another student, Arisha, blogged about meeting with the Imam, or prayer leader, at the Khadija Mosque, who “discussed how it took time for them to get the German government to trust them and they were always seen as a threat.” She adds, “This community considers themselves to be German.”

O’Brien supports his students’ classroom work with first-person experiences, and he looks for valuable opportunities where students can discover and grow. For example, he plans a visit to a secondary school where Trinity students talk with the local teens about contemporary issues surrounding immigration, and how it affects them individually.

O’Brien himself first experienced Germany as a young undergraduate, as part of a required study-abroad component.

“After that experience, I thought to myself, ‘I’ve got to have more of this’,” recalls O’Brien, who earned his bachelor’s from Kalamazoo College.

The Global City Berlin itinerary includes a tour of the Jewish Quarter, the Jewish Museum Berlin (the largest Jewish museum in Europe), and the Memorial to the Murdered Jews of Europe, commonly referred to as the Holocaust Memorial. Participants in Global City Berlin also meet with members of the Young Islam Conference, a youth group that makes policy recommendations to the Interior Ministry.

Forming small research groups, students take excursions to different neighborhoods, looking deeper into topics such as division and unification in Germany, or nationalism after World War II. O’Brien’s own research investigates the ways in which Muslim and non-Muslim Europeans view and interact with one another.

O’Brien, who earned his doctorate in Political Science from the University of Wisconsin-Madison, investigates tensions between German nationalism and Western liberalism in Berlin.

With empathy, according to O’Brien, one can “view the world and yourself through the perspective of others,” he believes. “It’s difficult to hate someone you know and understand, relate to.”