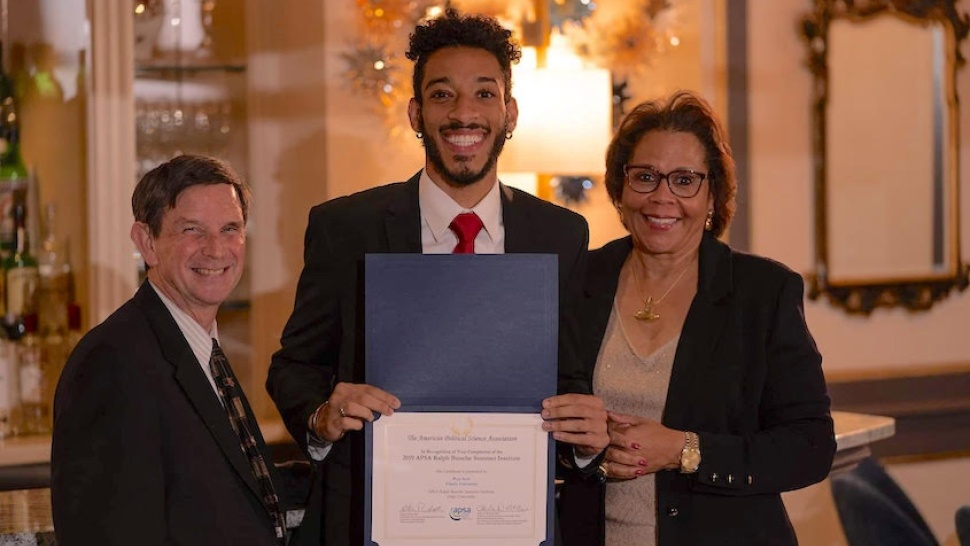 Seth was among 15 students chosen from a competitive national applicant pool and participated in the annual five-week program held at Duke University in May and June of this year.

“The program has opened a lot of doors for me,” Seth says. “We call ourselves ‘Bunches.’”

RBSI fellows, or “Bunches” attend a doctoral recruitment session aimed at connecting students with faculty members from some of the nation’s top political science departments.

“The recruitment fair helped me to begin thinking about where I might fit in the academy,” says Seth, who majored in political science as well as in African-American Studies—an interdisciplinary second major he created as part of the Pathways curriculum. “I’m confident about the graduate admissions process because of the Bunche Institute.”

Bunche fellows also enroll in graduate-level coursework in quantitative analysis, race, and American politics. Top students have the opportunity to conduct independent research, and Seth has been selected to present his research project titled “Ideological Uncertainty: Black Politics and the Liberal-Conservative Continuum,” at the American Political Science Association’s 115th annual meeting to be held in Washington, D.C. at the end of August. 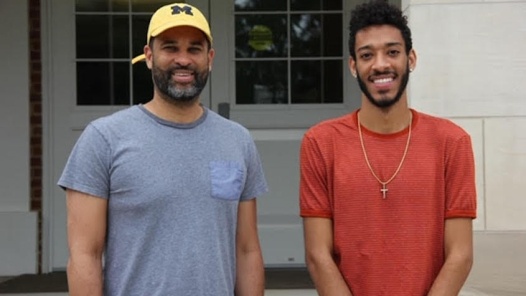 Dr. Banks and Pyar at the University of Maryland, College Park. We looked at emotions, the 2016 presidential election, and racialized counter strategies

“I believe that we, as a people, have a responsibility to ask big questions and think about solutions to those big questions,” he says about being part of the Black community.

Seth says that when he arrived at Trinity University as a transfer student and member of the Tiger track and field team, he felt tremendous support from faculty members. Faculty and advisers took him under their wings and showed him what it would take to get serious about a doctoral degree. 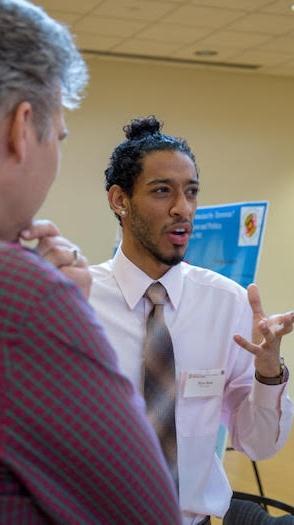 “I love the graduate environment. You get to pose a big question and try to develop an answer,” says Seth, who plans to pursue a concentration in political theory, and race and ethnic politics. “That’s really appealing to me.”

While Seth applies to graduate programs this fall, he continues working on several research projects with political science scholars. He is currently collaborating with Trinity communication professor Sarah E. Erickson, Ph.D. on a project related to democratic enthusiasm and racial attitudes titled “Motivated Reasoning and Race in American Politics.” He also is studying the topics of fear, policing, and the nature of disciplinary power with Mary McThomas, Ph.D., from the University of California, Irvine. Additionally, he is working with C. Keith Harrison, Ed.D, from the University of Central Florida studying Black identity and popular culture, in particular entertainment, sports, and hip-hop.

“I want to research, teach, and mentor,” he says. “When I think about my people—that is, the Black community—I realize that all three are central to advancing the status of the disadvantaged.”