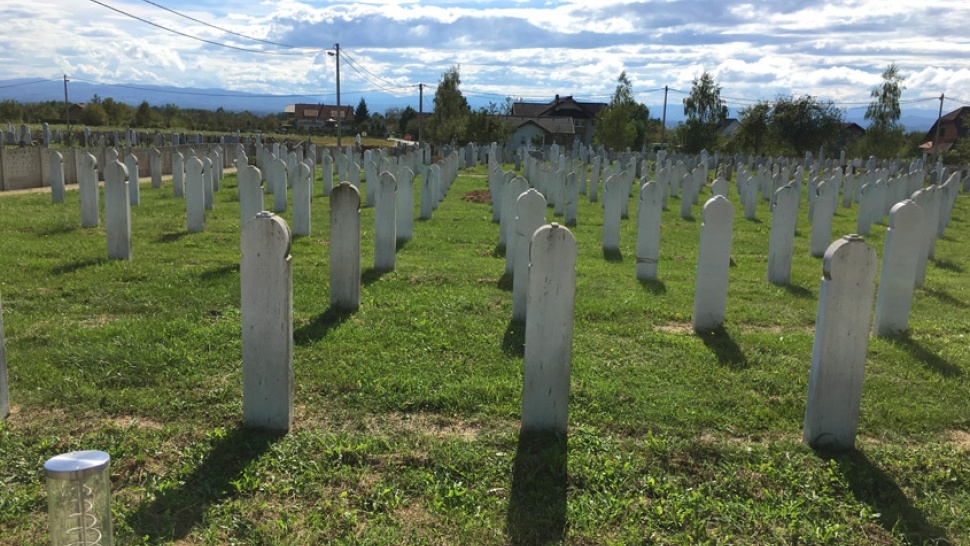 In the mountain town of Srebrenica, in eastern Bosnia and Herzegovina, there is a soccer field typical of most European villages. Children kick a ball back and forth, calling out to one another to pass. At first glance, it looks nondescript. An everyday meeting place to play sport.

Yet, tucked away on a concrete wall, invisible from the street, is a small marble plaque that tells a different story. It reads, “At this place, April 12, 1993, a grenade explosion caused by Serbian forces killed 74 Bosniaks and injured 100 from Srebrenica and Podrinja.”

Hasan Hasanovic, a middle-aged man with a stubborn five o’clock shadow, looks pointedly at the plaque. He was at the field that day and remembers that his team had let a team of younger players take the pitch first. Hasanovic was sitting on the steps surrounding the field when bombs began dropping from the sky.

“I was lucky that day,” Hasanovic says. “That is why I am still alive.”

Of the 74 Bosniaks, or Bosnian Muslims, killed that day, all were civilians.

As Hasanovic recounts his story, assistant Trinity political science professor Rosa Aloisi listens carefully. Aloisi, a scholar of international criminal justice, is using her fall sabbatical from Trinity to research the memorialization of sites of massacre and genocide within Bosnia and Herzegovina. Aloisi, a former intern for Trial Chamber II of the International Criminal Tribunal for the former Yugoslavia, is studying the impact of the Tribunal on the reconciliation process and what steps are being made to commemorate places where ethnic cleansing occurred.

Aloisi traveled within Bosnia and Herzegovina for one week in September, with Maria Protic ’18 joining her for three days. One of Aloisi’s observations was that memorials, like the one in Srebrenica and Potočari, were few and far between. Many sites had no memorial whatsoever or the memorial would acknowledge that people had died, but would not recognize how or why they were killed.

“Unfortunately, there are two policies in place right now,” Aloisi says. “One is hiding the places and the other is providing no commemoration whatsoever. Victims see no effort from local officials, who see no point in commemorating. Actually, they think it might trigger additional escalation of conflict.”

During her field research Aloisi photographed sites, studied artifacts, spoke to victims and families of the deceased, and took stock of the current political climate. Places that Aloisi visited include the Kravica Warehouse, the Srebrenica-Potočari Memorial Center, and the cities of Foča, Goražde, Prijedor, Sarajevo, and Višegrad.

Fourteen miles northwest of Srebrenica, the village of Kravica is inhabited primarily by ethnic Serbs. A warehouse in Kravica, now purposefully hidden by trees, was the site where more than 1,000 Bosniaks were executed by soldiers of the Army of the Republika Srpska on the night of July 13, 1995. There are no signs that genocidal killings took place at the warehouse. Aloisi was accompanied to the warehouse by a former soldier, Samir, from the Bosnian Army. As they approached the warehouse and farm, three men began to approach. Aloisi was told that they were likely paid by the government to check on any visitors to the farm. (This is intuition and not confirmed with proof). Although Aloisi’s companion believes their activities were reported to the police, they were not stopped.

From her work on the Tribunal, Aloisi saw that the Kravica Warehouse stood exactly as it had when crimes were committed there in 1995.

“There were still bullet holes in the walls,” says Aloisi. “The only difference is that the picture I remember seeing at the Tribunal showed the amount of bodies in front of the farm. It is almost an out-of-body experience to see the farm. It is chilling to think I was stepping on places where people had been killed for no reason, other than for a political plan to be met.”

Equally chilling, Aloisi adds, is that some in the area still pursue that same political plan.

In October, Aloisi and Protic submitted a proposal to the Midwest Political Science Association to present at an April conference held in Chicago to discuss their field research and it was subsequently accepted. Protic, a political science and economics double major from Niles, Ill., is also a first-generation Serbian-American. Her family has a home in Čačak, Serbia, where she spends part of each summer. For someone who has personally witnessed firsthand the effects of the Balkan wars, Protic could not pass up the opportunity to accompany Aloisi and share her translation skills and knowledge of the area.

As she traveled with Aloisi, Protic confronted her own bias as a Serbian and was forced to open her mind to “different sources of information and to consider all sides of an argument.”

“At times, I found it very difficult to be a Serbian visiting these areas and talking to survivors of the war,” Protic says. “Many times I thought to myself, ‘Serbia, why did you have to stoop so low and commit such atrocities?’ Don’t get me wrong. War crimes were committed on all sides, but the fact that these were my people and they caused so much pain to other human beings angered and disappointed me.”

Protic noted that a particularly memorable visit was the trip to Prijedor where she and Aloisi were able to speak with a war survivor. After being welcomed into his mother’s home, Protic listened to his firsthand account of life in a prison camp and the friendships he has sustained with Serbians after the war. Aloisi calls meetings like this one “transitional justice in the making,” with Bosnians and Serbians sitting down with one another.

Currently studying abroad in Budapest, Hungary, at Corvinus University, Protic says experiences like this one taught her far more than she could have ever learned in a classroom. (She has also traveled with Aloisi on a faculty-led study to Poland and The Hague.)

“Not recognizing the murder of Bosniaks would be a blatant lie or a dangerous form of propaganda,” says Protic. “It is important to recognize that murder occurred in order for history to be written and discussed correctly. Without the truth, chances for reconciliation are completely lost.”

And while Aloisi and Protic’s field research was observational in nature, Aloisi hopes that her work will eventually make an impact from a policy standpoint. She wants her work in academia to open the eyes of those in policy-making positions. Although she is deeply concerned that a pattern of hate and violence might resurface in eastern Bosnia and Herzegovina, she plans to continue her study of memorialization in the future.

“The conclusion now is that the legal truth is not finding a correspondent social and political truth locally in Bosnia,” says Aloisi. “If denial is the enemy of reconciliation, we are still many steps away from securing a region still torn by ethnic divisions and plagued by a political propaganda driven by hate.”