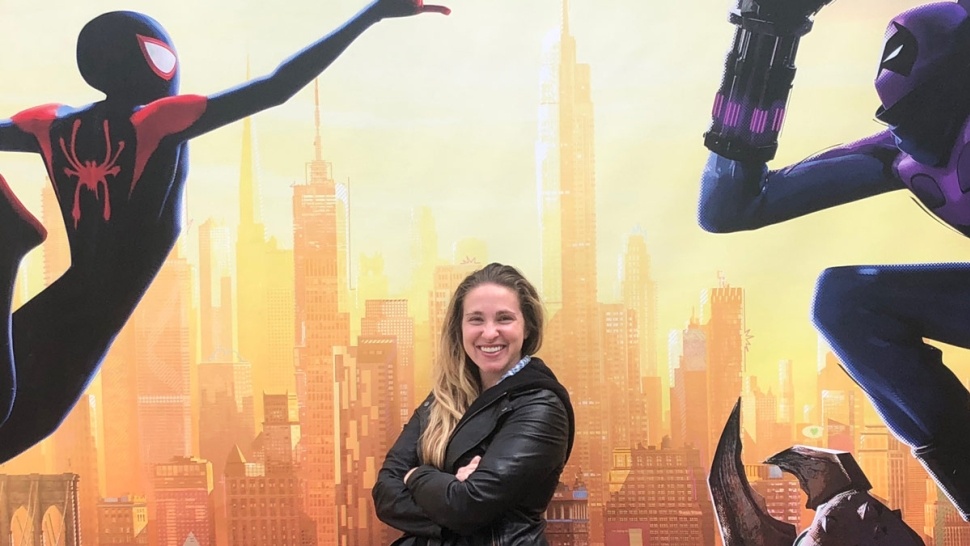 Lara Bahr ’10 is an entertainment lawyer in Los Angeles with an explorer’s heart. Before landing a spot on Sony Pictures’ team responsible for the Oscar-winning animated film Spider-Man: Into the Spider-Verse, she tried her hand at everything including working as a hiking guide in the Swiss Alps, as a legal intern in Kuwait, and an associate to a Bay Area sports agency.

When Lara enrolled at Trinity, her initial calling was to work at the United Nations. She served as public relations and fundraising chair for the University’s Model United Nations Club.

Trinity’s political science faculty showed her there was more to the discipline than just how governments work. “One class dealt with Post-Traumatic Stress Disorder and veterans issues. I remember watching the movie Rambo,” says Lara, who earned a Trinity academic scholarship.

Lara recognized in the 1982 film First Blood a confluence of political science, international relations, veterans issues, and how complex feelings and circumstances were being depicted by the entertainment industry. “When I finished undergrad, I took a year to figure out my next steps,” she says. 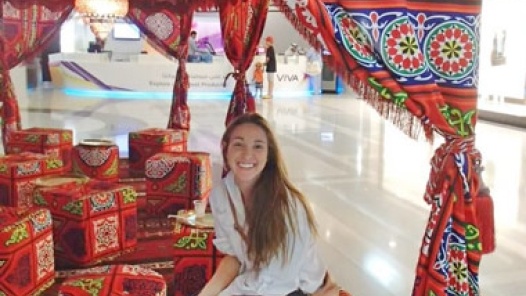 To understand those next steps, you need to understand a little bit about Lara’s family. They’re big on travel, Lara notes: Her mother is a certified scuba instructor who participated in archaeological excavations; her father, a linguist who speaks seven languages, was a staff sergeant for the U.S. Air Force doing voice interception in Iran. He later worked in the Kingdom of Saudi Arabia for ExxonMobil. (Believe it or not, as the first lawyer in her family, she says she’s the “normal one.”)

“I have a really cool family,” says Lara, who grew up in Kingwood, Texas. “When I was a little kid, that was always the passion—to travel the world, to experience different cultures.”

As a teen, Lara backpacked the Swiss Alps with her Girl Scouts troop. It was an experience so memorable it called her back to the mountain range after graduating with her bachelor’s in political science. “I went back to Switzerland and worked as a hiking guide in the Alps,” she says.

There, Lara met many people working in international law. “The law is similar in most parts of the world. It brings people together in that way,” she recalls. “I had an epiphany. I wanted to take my passion for all things global and transform it into legal work.”

Lara’s LSAT score and academic achievements earned her a full-ride scholarship for her first year at Santa Clara University School of Law School. While a law student, Lara worked in Kuwait for a firm specializing in corporate law, then interned for a sports agency in the Bay Area. A student-athlete at Trinity, she was eager to learn more about sports agency work. Lara served as one of the senior captains of Trinity’s swim team her senior year, and was a Four-Time Division III Championship Team member.

It was there she reflected on the ways sports is essentially a form of entertainment. “The same way law transcends language and borders, so does entertainment. It brings people together,” she says.

This, combined with her myriad experiences in law—working at an employment litigation firm, a marketing start up, within the general counsel at Creative Artists Agency and associate at a WynnMedia—helped her hone in on fields best suited to her strengths. Ultimately, working behind-the-scenes was where she shone. “I thought entertainment law would be a good way to take my passion for crossing borders and put it into something tangible.”

Today, Lara works in Business Affairs for Sony Pictures Animation where she leans on her law degree as well as her marketing minor from Trinity.

“Sony’s animation department has a start-up feel. Everything is fast-paced and has the benefits of a large corporation, but I can also wear jeans and drink loads of energy drinks. There’s a good work-life balance,” she says.

Lara is still a junior employee at Sony, but so far, working internally with a film studio is a great fit for her. “You feel like you’re part of something,” she says. “It was interesting to see the beginning stages of Into the Spider-Verse, the rough scripts, the black and white illustrations, then the coloration. Now for it to have won an Academy Award for Best Animated Feature is awe-inspiring.”

Into the Spider-Verse also won a Golden Globe Award for Best Animated Feature Film in 2019. Critics have widely hailed the feature film for its daring animation style. The night of the Golden Globes, Lara sat on her couch with her friends and housemates watching the ceremony. As the Spider-Man team accepted the award, she sat in awe of the people she recognized: “It’s cool having been part of the decisions behind something so groundbreaking.”