Taking Flight
Young alumna reaches millions of fliers each month as editor of Southwest: The Magazine
Nicolette Good ’07
Friday, May 3, 2019 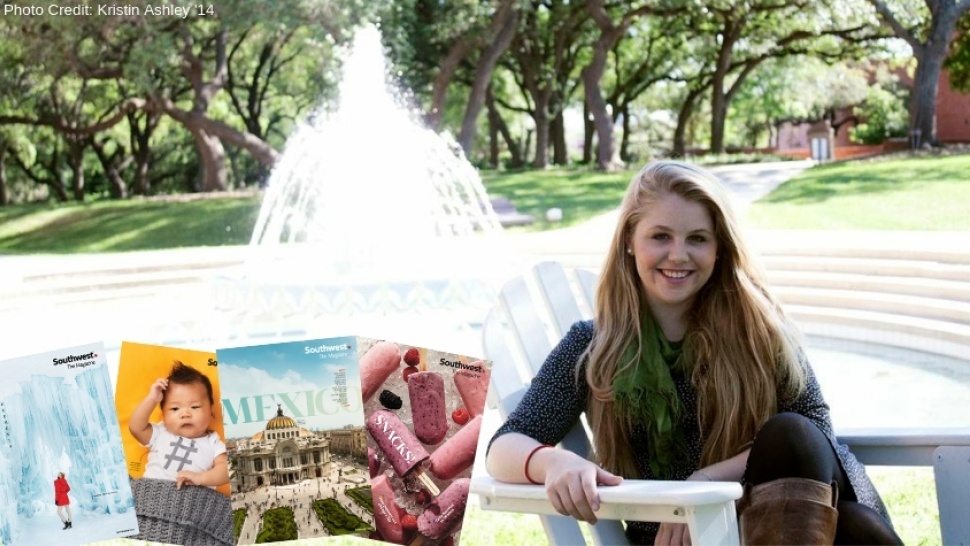 Tommie Ethington ’13 steps into her office where she’s an editor for Southwest: The Magazine and sets down an iced green tea, unsweet. Her job is to inspire six million monthly readers to travel to the nearly 100 destinations Southwest Airlines flies.

For her own inspiration, she keeps several years’ worth of the in-flight magazine at her desk, as well as her personal favorites, including Bon Appetit and AFAR.

“I’ve always been a magazine hoarder,” says Ethington from her new home of Dallas, Texas, where she works for Pace Communications, which produces the magazine for the nation’s largest domestic air carrier.

As an editor for the most-read in-flight monthly publication, Ethington reviews unique hotels, creates compelling travel guides, and writes the “One Question” section: a quick interview serving as the magazine’s last word.

“I’ve interviewed some really cool people: Kurt Russell, Anjelica Huston, Gwen Stefani,” she says. “It’s wild when they call. You know it’s going to be Kurt Russell on the other end, but that doesn’t make it any less surreal when you actually hear his voice.”

She gets just 15 minutes with her subjects on the phone. So, Ethington says, she needs to make it count.

“You must be unafraid of pushing a source for answers to get beyond the neatly packaged soundbite,” says Ethington, who majored in communication at Trinity with an emphasis in media studies.

She collected issues of Teen Vogue and TIME growing up in Jackson Hole, Wyo., but it wasn’t until enrolling at Trinity University that she connected the dots between her love for magazines and a career in journalism.

As a first-year student, Tommie Ethington interned with the Trinitonian and quickly fell in love with the University newspaper.

“People reacted to the news and had an opinion,” she recalls. “I loved that it was very much a reflection of what was happening on campus.” 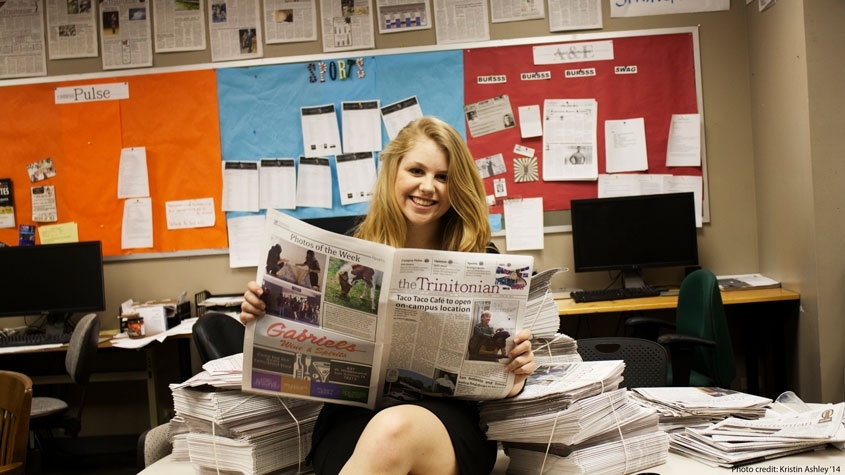 Her senior year, she took the top student position as editor-in-chief. No small feat—the paper had a $100,000 budget, and she oversaw a staff of more than 40 students. Working until 5 a.m. to finish a 32-page weekly paper was not unheard of.

“It was powerful to me when I graduated, knowing I had that skill set,” says Ethington, who gained early travel writing experience as the paper’s abroad columnist. “It was a real-world environment I got to live in. That’s not an opportunity a lot of people get that early on.”

To her, the Trinitonian also was a microcosm for understanding the responsibility of the press, and it presented her team with complex, real-world ethical questions.

“We discussed how what we printed affected other people—people you sit next to in class,” she says.

In one such instance, the Trinitonian had to decide whether to print names of students involved in allegations of misconduct. For guidance, she leaned on mentor and trusted adviser Katharine Martin, the student involvement adviser for the newspaper. In the end, the paper ran the names, a decision Ethington says the Campus Publication Board supported with praise.

“I’m better in the real world because I had to make those kinds of difficult decisions,” she says.

Ethington learned about many types of journalism as a student, including a stint with TigerTV. But her ultimate pursuit was magazines.

“I would not be where I am today without Sammye Johnson,” she says about the Professor Emerita of communication. “I took ‘Magazine Writing’ my sophomore year, and I still have that binder at my desk today.”

“Sammye is famous for giving ‘slash F’ grades, which means you have an error of fact in your writing,” says Ethington. “That would immediately give you an F on the paper.”

Ethington fondly keeps a commemorative pen inscribed with “/F” from Johnson’s retirement celebration at her desk.

Johnson had gone to bat for Ethington who, as a junior, eyed a prestigious summer internship with the American Society of Magazine Editors (ASME). Because the program was highly competitive, she suspected it was a shot in the dark. But Johnson encouraged her to apply for the paid opportunity to work in New York City for acclaimed publications such as National Geographic, Glamour, and InStyle.

Johnson mailed a glowing letter of recommendation to ASME, postmarked from Helsinki, Finland. The professor was a Fulbright Scholar teaching graduate courses and doing research at the time, but that didn’t stop her from helping a student back home.

Ethington herself was on an international adventure when she learned the good news about her acceptance to the competitive ASME program. She was living aboard a ship for 100 days with the Semester at Sea education program, which took her to more than 10 countries and aligned coursework with unique issues facing those places. 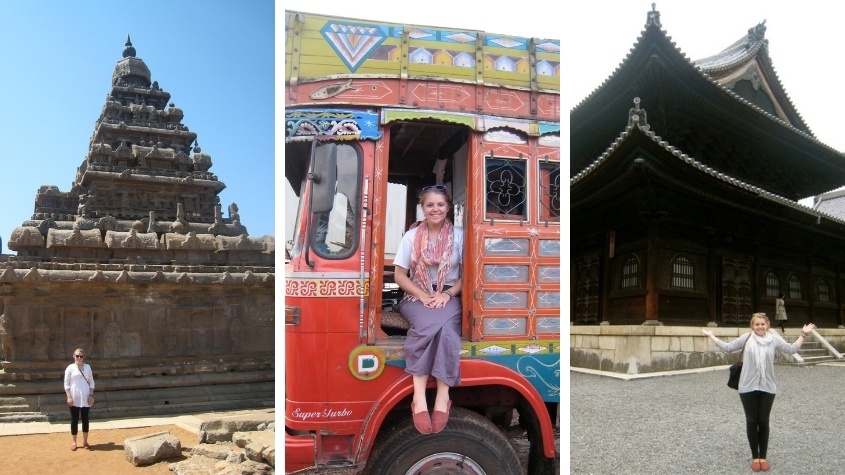 “When we went to South Africa, we were learning about apartheid. In Ghana, we learned about child labor,” says Ethington, who was studying in Vietnam when she received news she’d been accepted to the ASME internship.

Later as a young alumna and informed by that first-hand experience in Vietnam, Ethington shared an intimate dinner with film documentarian Ken Burns and other Trinity community members at the Trinity president’s home. The special invitation came thanks to communication chair Jennifer Jacobs Henderson, who recommended the young graduate.

Over the meal, Ethington listened as Ken Burns discussed his then-unreleased documentary series, The Vietnam War, with dinner guests, one of whom was himself a veteran of the war.

“I don’t know why I’ve been lucky enough to get so many opportunities, but Trinity has connected me in so many ways to really incredible people,” says Ethington.

She says every internship or job she’s landed was in one way or another because of a Trinity connection.

“Because we’re a small school, I didn’t expect our alumni network would be so vast and helpful. Trinity alumni go out of their way to help one another,” says Ethington, who now makes a point to recommend other Trinity Tigers for internships or jobs at her organization. “I try to pay it forward.”