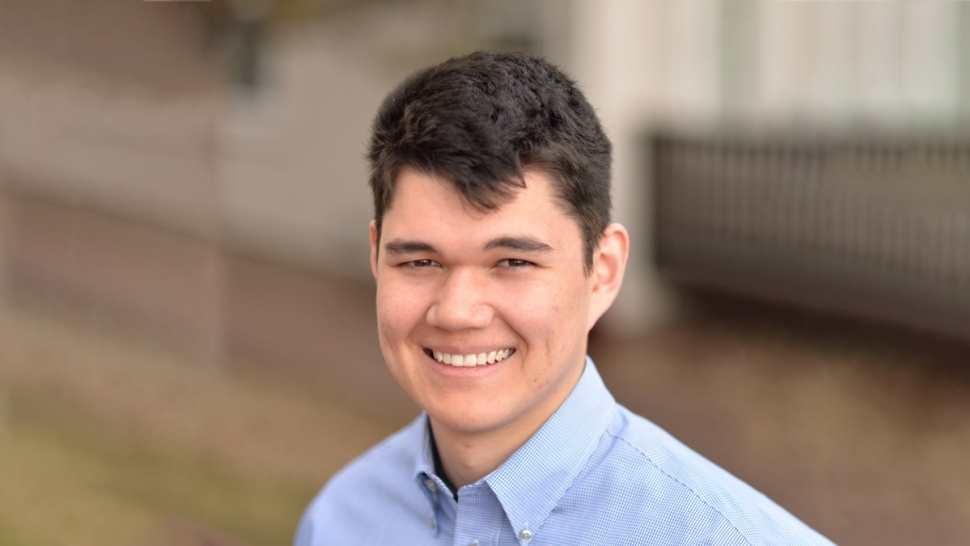 When Nathan Keplinger ‘21 graduates this May, he’ll leave Trinity with an incredibly well-rounded experience.

Originally coming in as a first-year engineering science student, Keplinger shifted to a double major in physics and Chinese. In addition to English, Keplinger also has some experience speaking Spanish.

“I’ve always been interested in languages,” Keplinger says. “I lived in Ecuador as a kid, so I knew some Spanish, and I always thought it would be cool to be trilingual.”

Keplinger says he came to Trinity because its approach to the liberal arts gave him a good chance to immerse himself in all his interests. Before the COVID-19 pandemic, he got to study abroad for nine weeks in north China, where he didn’t speak any English the entire time. “That really improved my Chinese,” he says.

Keplinger points to a solid experience with Trinity’s Chinese major, which stands as one of the largest Chinese programs for a liberal arts college in the nation. At Trinity, all degree-seeking students in the program study abroad in a Chinese-speaking country and enjoy access to exchange partnerships with universities in Shanghai, Zhuhai, Hong Kong, and Taichung.

Students like Keplinger can also take advantage of smaller class sizes to build good working partnerships with faculty. “I’ve had a lot of good classes with Dr. Jinli He,” he says. “I’ve definitely bolstered my Chinese skills through her classes.”

On the physics side of things, Keplinger has enjoyed an experiential approach to his studies. At Trinity, physics majors take on extensive lab work and get hands-on instrument use inside Trinity’s $127-million Center for the Sciences and Innovation.

Just like with the Chinese program, Keplinger also got to work closely with his physics professors—with no graduate student or teaching assistants acting as middlemen. He’s gotten to participate in research projects directly: “I’ve really enjoyed spending time with Dr. Nirav Mehta,” Keplinger says. “I’ve studied the symmetry of ultra-cold atoms, and also analyzing the audio spectra of oboe sound files, which I’m doing now for my senior project.”

As Keplinger looks back at his time at Trinity, he says two things stand out in his decision to enroll: scholarships and class size.

“Scholarships were definitely a factor in my decision. I was very grateful to be able to come to a school and not have to entirely worry about finances,” he says. “It’s nice to have institutional support on that end—student debt is a large problem, and in a struggling economy that can be stressful.”

While Keplinger notes the resources Trinity offers—scholarships, facilities, technology, expert professors, research opportunities—much of what makes the University special goes back to the smaller size of the school.

“I came to Trinity because I had gone to a small high school, and I was really interested in a small community,” Keplinger says. “That’s definitely something I was looking for in my college experience.”